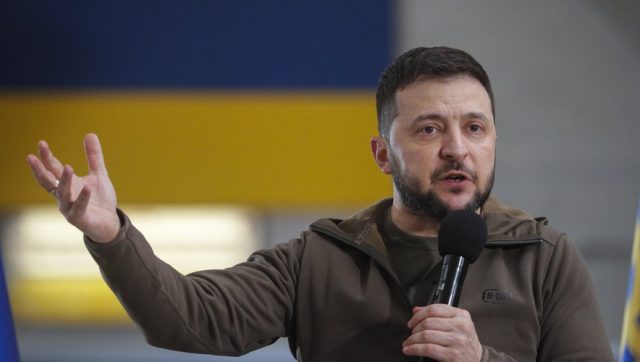 The President of Ukraine, Volodimi Zelensky, spoke to his people this Sunday, April 24, 2022. A special day on this Orthodox Easter.

Injustice will not destroy Ukraine, promised Sunday Volodimir Zelensky who addressed his compatriots on this Orthodox Easter Sunday two months to the day after the Russian invasion.

Speaking outside St. Sophia Cathedral in kyiv, the Ukrainian president said he prayed for children to find joy in life and for the bereaved to find comfort. “Today we believe more than ever in a new victory for Ukraine and we are convinced that it will not be destroyed by any horde and any injustice,” said Volodimir Zelensky.

Traditionally crowded for Orthodox Easter celebrations, Ukrainian churches did not bring together as many faithful as usual, the Kyiv authorities having asked the clergy to avoid too large gatherings fearing that places of worship become the targets of Russian artillery.

Read:  Deadly stampede at the CAN: an "reckless" opening in question?

“Marioupol and its heroic defenders”

“Give every boy and every girl a happy childhood, youth and old age that will allow them to partially erase the terrible times of war,” the Ukrainian president said in a prayerful speech. “Take care of our mothers, grant patience to those who await the return of a son or daughter from war.”

“Give courage to those who will unfortunately not see the return of their child who has gone to the front,” he continued. “Don’t forget Mariupol and its heroic defenders.” “You can destroy walls, but you cannot destroy the foundations on which rest the spirit of our warriors, the spirit of the whole country.”