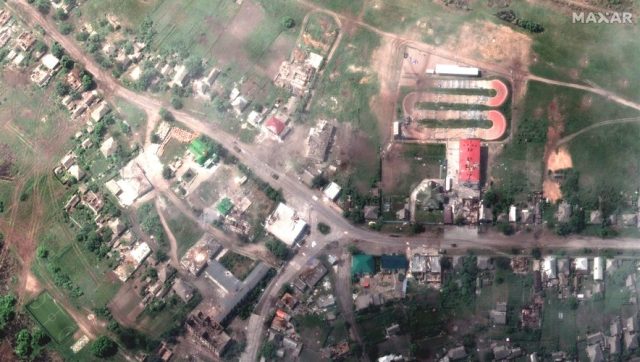 The Russian Defense Ministry said on Saturday that the eastern Ukrainian town of Lyman was now under full control of Russian forces and pro-Russian separatists, but Kyiv says the battle there is continues.

This announcement comes the day after the separatists of the self-proclaimed People’s Republic of Donetsk claimed the conquest of another Ukrainian city, Sievierodonetsk, a strategic rail hub.

Hanna Malyar, Ukraine’s deputy defense minister, said fighting in Lyman was continuing, according to the ZN.ua website; but it is very difficult in the immediate future to independently confirm the assertions of the Russian Ministry of Defense.

In a British intelligence report, published by the country’s Ministry of Defence, London believes that Russian forces, which are attacking from three directions in the Donbass in an attempt to encircle Ukrainian forces in Sievierodonetsk and Lyssychansk, who are facing each other on along the Donets River, will probably try to cross this river in the next few days.

Sievierodonetsk, about 60 km from Lyman on the east bank of the river, is the largest city in the Donbass still held by Ukraine and is facing a heavy onslaught from Russian forces.

“Sievierodonetsk is under constant enemy fire,” Ukrainian police said in a social media post on Saturday.

Russian artillery also bombarded the road between Lysytchansk and Bakhmout, held by Ukrainian forces. “There was significant destruction in Lysytchansk,” added the Ukrainian police.

Ukraine’s military said on Saturday it had repelled eight assaults in Donetsk and Luhansk in the past 24 hours.

“If Russia succeeds in taking control of these areas, it would most likely be seen by the Kremlin as achieving a major political goal and would be presented to the Russian people as justification for the invasion,” says a report from the Kremlin. British intelligence.

After the failure of its assaults on Kyiv, the capital, and Kharkiv, the second city of Ukraine near the Russian border, Russia decided to concentrate its efforts on taking the two provinces of Donbass, Donetsk and Luhansk, whose part of the territory has already been in the hands of pro-Russian separatists since 2014