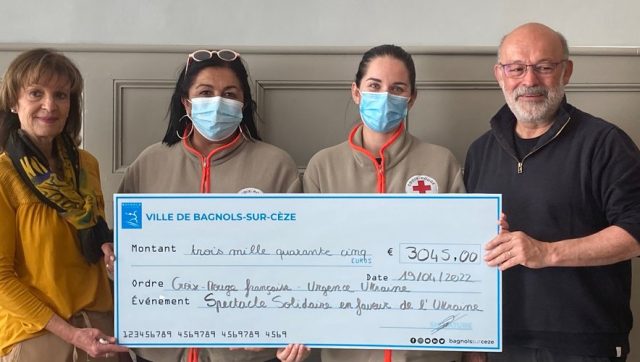 This is the amount of admissions to the show for Ukraine organized by the town hall of Bagnols-sur-Cèze on Sunday April 3. The holiday party committee also contributed.

On Tuesday April 19, the mayor of Bagnols-sur-Cèze Jean-Yves Chapelet and his assistant in charge of solidarity and social dialogue, Michèle Fond-Thurial, presented a check for €3,045 to the French Red Cross represented by Yasmina Barra, director of social action and Monalisa referent. Paying tribute to the generosity of his fellow citizens, the city councilor said he was proud to be the mayor of Bagnols.

This donation is very important because the actions carried out in the field are very expensive.

This amount corresponds to the amount of money collected during the solidarity show in favor of Ukraine that the City had organized on April 3. Jean-Yves Chapelet expressed his gratitude to the festival committee which organized a sale of cakes. The gratitude of the first magistrate of the commune also goes to all the artists who have contributed to the manifestation of such a surge of solidarity.

The mayor also paid tribute to the French Red Cross. “You are in all the fights” did he declare. “This donation is very important because the actions carried out in the field are very expensive in terms of logistics, security and organisation. Sending equipment costs a lot of money”for their part underlined the representatives of the French Red Cross.