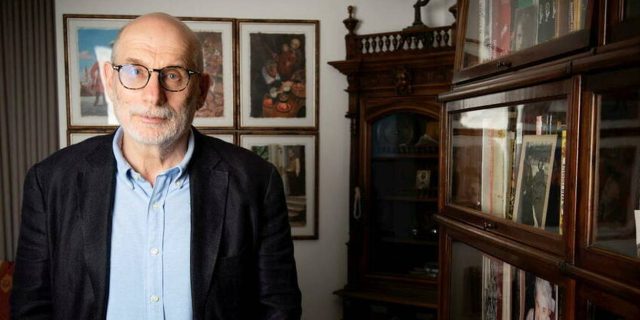 IThey are a writer, economist, and choreographer. Three Russians have just founded a non-profit charity to raise funds to help Ukrainian refugees: True Russia. The first, Boris Akunin, whose real name is Grigori Chalvovitch Tchkhartichvili, 65-year-old essayist and writer, author of a series of historical thrillers featuring Fandore Pandorin in 19th-century Moscowand century, decided to leave Russia in 2014, when Crimea was annexed. When he understood that “Russia was becoming a dictatorship, and Putin would never resign”. He now lives between Great Britain, France and Spain.

The second, Sergei Guriev, 50, is professor of economics at Sciences Po Paris, former chief economist of the European Bank for Reconstruction and Development (EBRD) between 2016 and 2019, after having directed the New School of Economics in Moscow between 2004 and 2013, the most modern and “high-tech” university in Russia. In 2010, at the request of President Dmitry Medvedev, he participated with eight other experts in writing a report intended to clarify the highly publicized trial of oligarch Mikhail Khodorkovsky.

Suspected of corruption, the businessman had just been imprisoned. The revision of this judgment was later called into question again by Putin’s government when it returned to power in 2012. Sergei Guriev also gave its support from 2012 to another opponent of Putin: the political activist Alexeï Navalny. Sergei Guriev has since left Russia in 2013, hasclose to multiple searches of his offices, mails and financial transactions.

The third, Mikhaïl Baryshnikov, 74, former star dancer of the Kirov in Leningrad (today Mariinsky Ballet of Saint Petersburg), moved to the New York City Ballet and at the American Ballet Theatre, where he also served as choreographer and artistic director, now living in New York. He left Russia almost half a century ago, seeking asylum in Canada to escape the USSR on an international tour in 1974.

Read:  Frenchman Benjamin Brière sentenced to 8 years in prison in Iran for "espionage"

Go beyond words and engage

“For us, the Russians opposed to the dictatorship, the invasion of Ukraine was a shock,” Boris Akunin told us in London. “As for everyone, but perhaps even more so because the aggressors from Ukraine spoke the same language as us,” he said. The Russian-speaking intellectuals of the diaspora (a swarm that Akounin estimates at 10 million individuals) began by “writing to each other, saying things to each other, talking to each other, and protesting”, continues the writer, but they have, according to he quickly felt it was time to go beyond words and take “action”.

The trio confers, believes that “the majority of people must feel the same distress”, that “many of them have already participated individually in an aid program for Ukraine”, and that all that is missing is a common channel to join forces.

On March 9, Akunin, Guriev and Baryshnikov therefore launched an online fundraiser, entitled True Russia (the real Russia), because, continues the writer, “it was important to show the world that the real Russia is not Putin’s Russia, but that normal people, with moral values, and concerned with doing the right thing”.

An initiative against “the criminal war” of the “dictator who currently holds power”, and for “the future of Russia”, declares their profession of faith available online on their site. Their statement proposes to help their “Ukrainian friends”, because “hundreds of thousands of them, who have lost their homes, their means of subsistence, their loved ones and even their lives, bear the full brunt” of the war.

Read:  liveLIVE. War in Ukraine: the Russians have left Chernobyl

Hosted on Britain’s most respectable zero-commission crowdfunding platform, True Russia, after a month of existence, backed by charity nights and cultural figures scattered around the planet, has almost achieved the target set a million pounds.

Akunin explains that the initial fundraising is on its way to becoming a ” real platform »after recruiting journalists ” who left Russia due to the closure of the independent media, and who dispersed around the world to flee the dictatorship”.

While the professor of Sience Po, Sergei Gouriev, encourages his side to thwart the supporters of the Kremlin directly. “I can tell you that in the education community, the overall answer is very simple: we stop working with Russian institutions, but we continue to welcome academics and students, individually. Because the Russians, like the conductor Valery Gergiev, known to be an ardent supporter of Putin, will have to make a choice. It is very difficult to make this choice. But if you don’t interrupt your projects in Russia, if you support Putin’s regime, then don’t be surprised to be boycotted by the public! »