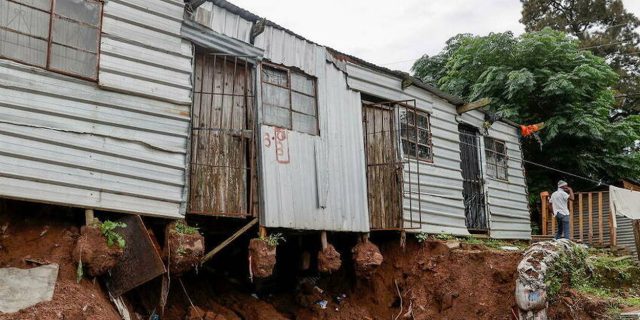 PNearly 300 people have died after a series of floods, the worst in the country, in South Africa, according to a latest report on Wednesday from local authorities, who are facing an influx of bodies in morgues. The record rainfall, which since last weekend has reached a level not seen for more than 60 years, has left behind devastated landscapes. Collapsed bridges, submerged roads, in some places around the port city of Durban, the first city of Kwazulu-Natal (KZN, east) and epicenter of the disaster, landslides have left giant breaches in the earth as if split by the torrents of water. “On the evening of April 13, we were informed that the death toll from the floods in Kwazulu-Natal stands at 306,” said Nonala Ndlovu, spokesperson. A previous report put the death toll at 259.

President Cyril Ramaphosa visited bereaved families in the morning. In Clermont, a poor suburb of Durban, he promised government aid to a father who lost his four children, buried in the collapse of a section of their house. South African President Cyril Ramaphosa on Wednesday lamented “a disaster of enormous proportions”. With folded hands, the man told the head of state about the water rising in the middle of the night, the electricity cut, his children asleep in another room and whom he failed to save. “We see similar tragedies hitting Mozambique, Zimbabwe, but today it is we who are affected,” lamented Cyril Ramaphosa. Local authorities are calling for a state of natural disaster to be declared.

The rains are expected to slowly dissipate in the evening, according to meteorologists. But already the region open to the Indian Ocean, which saw massive destruction during an unprecedented wave of riots and looting in July, seemed to be experiencing a respite. “In 48 hours, more than 450 mm of water fell in certain areas,” Dipuo Tawana, forecaster at the national meteorological institute, told Agence France-Presse. Specialists compared the level of precipitation to that “normally associated with cyclones”.

The army was mobilized to provide air support during the evacuations. Thousands of homes were destroyed, at least 140 schools were affected, according to local authorities. For several days, the main roads have been submerged in a brownish molasses, on which the signs and traffic lights float. Mountains of branches, bottles and rubbish were washed onto Durban’s beaches, which are usually popular with tourists and families. Activity at the port was suspended, containers were washed away. Looting has been reported. The heavy rains also led to power cuts and disrupted water supplies. Rail links have been suspended and residents urged to avoid travel.

“We know that it is climate change that is getting worse, we have gone from extreme storms in 2017 to supposed record floods in 2019 but clearly exceeded today in 2022”, warned Mary Galvin, professor of development studies at the University of Johannesburg. In 2019, floods in the region and the neighboring province of Eastern Cape had already claimed 70 lives and devastated several coastal villages in mudslides.