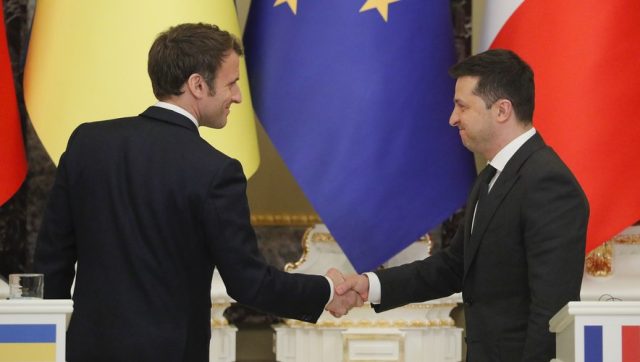 Russian forces pounded the Donbass region in eastern Ukraine on Saturday, failing to capture the three targets, the Ukrainian army said, while according to Moscow Western sanctions against Russia and the arms deliveries to kyiv are hampering peace negotiations. In the aftermath, Macron pledged more military and humanitarian aid to Zelensky today.

Emmanuel Macron, promised this Saturday, April 30 to strengthen France’s support for Ukraine in military equipment and humanitarian aid during a one-hour telephone interview with his Ukrainian counterpart Volodymyr Zelensky.

The French president also reaffirmed on this occasion “his desire to work actively during his second term to restore the sovereignty and territorial integrity of Ukraine, always maintaining close coordination with its European partners and allies”, said let the Elysée know.

Russia continues its offensive in the East

The Russians tried to seize the areas of Lyman in Donetsk and Sievierodonetsk and Popasna in Luhansk, the Ukrainian forces’ general staff said during its daily briefing. “Without success – the fighting continues,” he said today.

Russian Foreign Minister Sergey Lavrov said early on Saturday that the lifting of Western sanctions against Russia was a condition for the success of peace negotiations which he says are difficult but continue daily via video link.

Ukrainian President Volodimir Zelensky, for whom the sanctions must be reinforced, estimated for his part that Russia’s abuses could derail talks.

Ukraine accuses Russian troops of committing atrocities in areas near the capital, Kyiv, which they previously occupied. Moscow denies these accusations.

Sergei Lavrov said that if the United States and other NATO member countries really wanted to end the Ukrainian crisis, they should stop sending weapons to Kyiv.

In Washington, the $33 billion aid plan presented by US President Joe Biden for Ukraine, including $20 billion in military aid, has received support from both Republicans and Democrats.

Failing to have been able to seize kyiv, during an offensive which left behind it a field of ruin, killed thousands of people and forced five million Ukrainians to flee abroad, Russia is now concentrating over eastern and southern Ukraine.

Moscow is now trying to take full control of the eastern Donbass region, made up of Luhansk and Donetsk, parts of which were already controlled by Russian-backed separatists before the invasion.

Serhi Gaidai, governor of Luhansk, told Ukrainian state television that the Russians were shelling the whole region “but they couldn’t get through our defence”. He added that the evacuation of civilians would continue despite the difficult situation.

According to Serhï Gaidai, two schools and 20 houses were destroyed by Russian attacks on Friday in Rubizhne and Popasna, both located in Luhansk.

Mykola Khanatov, head of the military administration in Popasna, said two buses sent to evacuate civilians from the town came under Russian fire on Friday and he had not heard from the drivers since.

Attacks have also been reported in areas outside Donbass.

Mykola Lukashuk, head of the Dnipro regional council, said Russian forces shelled the outskirts of Velika Kostromka in the Kryvi Rih region. A village on the border of the Zaporizhzhia region was also shelled. Unverified social media posts report shelling in the northeastern city of Kharkiv.

Reuters could not independently verify the two parties’ accounts of operations on the ground.

Ukraine’s Border Guard Service posted a video on its Facebook page showing about 16 visibly exhausted soldiers in fatigues, most in helmets and holding guns, singing the national anthem in a small basement room.

According to this service, they are border guards contributing to the defense of the Azovstal steelworks, the last stronghold of Ukrainian forces resisting Russian invaders in the strategic port city of Mariupol, on the Sea of ​​Azov.

Moscow calls the war a “special military operation” to disarm and “denazify” Ukraine, defend Russian speakers from persecution, and prevent the United States from using the country to threaten Russia.fa

Ukraine rejects these allegations and says it is fighting to preserve its territorial integrity in Donetsk and Luhansk, which form the Donbass region.

Western officials say Russia has suffered fewer casualties since limiting the scale of its invasion, but said they remain “quite high.”