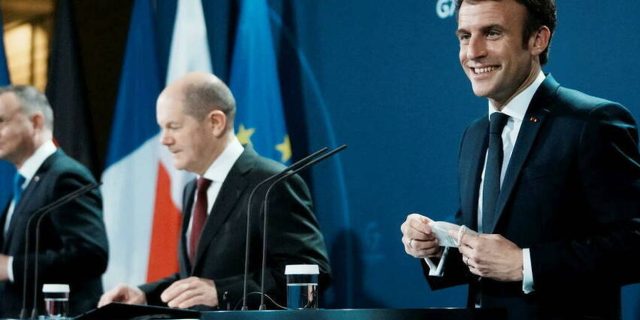 Emmanuel Macron, back from talks in Moscow and Kiev on the Russian-Western crisis linked to Ukraine, called on Tuesday evening to conduct “a demanding dialogue with Russia”, because it is “the only path that will make it possible peace in Ukraine”. “We must together find ways and means to engage in a demanding dialogue with Russia […] “, declared the French president during a press conference in Berlin. “The re-engagement of this dialogue is the only path that will make peace in Ukraine possible,” he assured.

Polish President Andrzej Duda for his part considered that it was possible to avoid a new escalation in the Russian-Western conflict around Ukraine and that the Europeans, through their common efforts, should succeed in “avoiding war”. . “That we can avoid war, as I said, is our fundamental task today, I think we will achieve it,” said the Polish president in Berlin during a press briefing held before a dinner working with German Chancellor Olaf Scholz and French Head of State Emmanuel Macron.

Germany, France and Poland are “united” in their goal of keeping peace in Europe, said German Chancellor Olaf Scholz, peacekeeping must take place “through diplomacy and through clear messages, as well as the common will to act together,” he added.