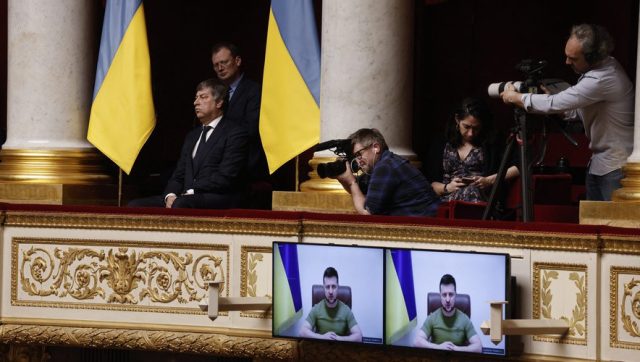 Volodimir Zelensky on Wednesday urged France to support Ukraine in its defense of the values ​​of freedom, equality and fraternity against Moscow and asked French companies still present in Russia to stop financing the Kremlin war machine.

“We expect from France, from your leadership, that you can make Russia seek peace to end this war against freedom, equality and fraternity, against everything that has made Europe united, free and diverse”, said the Ukrainian president, via a translator, before the two chambers of the French Parliament, to which he asked to observe a few moments of silence in tribute to the Ukrainian victims of the war.

“We expect from France, from your leadership the restoration of the territorial integrity of Ukraine. We can do it together and if there are people who have doubts among those present, I can tell you that your people is safe, like all the other peoples of Europe.”

Three candidates for next month’s presidential election, some of whom have taken positions in favor of Russia or against NATO, have been jostled by the offensive launched by Moscow – Marine Le Pen, Jean-Luc Mélenchon and Nicolas Dupont-Aignan – were present in the hemicycle of the Bourbon Palace during the speech of the Ukrainian head of state.

“Renault, Auchan, Leroy Merlin must stop sponsoring Russia’s war machine, stop funding the murder of children and women, the rapes. Everyone must remember that values ​​are worth more than profits,” said the Ukrainian head of state in this brief speech by video link, broadcast on two screens in the hemicycles of the two chambers of Parliament.

Renault was not immediately available for comment. The group had indicated earlier on Wednesday that it was considering suspending production again at its Moscow factory from this evening due to logistical problems.

Auchan declined to comment. Last week, a spokesperson for the French distributor found the criticisms made against him by the Ukrainian president extremely surprising.

Leroy Merlin, who belongs to the same group as Auchan, also declined to comment.

“We need even more help, so that freedom does not lose, anti-tank weapons, anti-aircraft defense. You can help us,” insisted the Ukrainian president before the French Parliament.

Comparing to “ruins of Verdun” the destruction inflicted by the Russian army on Ukraine since the start of its invasion operation on February 24, Volodimir Zelensky also called on the French presidency of the European Union to promote the “historic” accession of the Ukraine to the community bloc.

“Thank you France, glory to Ukraine”, concluded the Ukrainian president to the loud applause of deputies and senators.