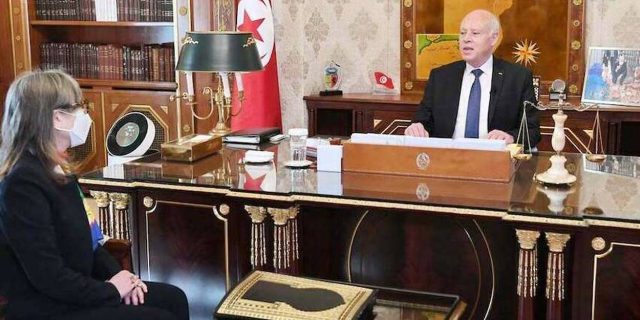 Tout a symbol: it was on the night of February 5 to 6, the anniversary of the assassination of the activist Chokri Belaïd in 2013, that President Kaïs Saïed announced, from the Ministry of the Interior, the dissolution of the Superior Council of the Judiciary (CSM), an independent body created in 2016 to appoint judges. The Tunisian head of state criticizes some of the judges, whom he accuses of corruption, and believes that the CSM notably slowed down investigations into the assassinations in 2013 of two left-wing activists, Chokri Belaïd and Mohamed Brahmi. He also accuses the CSM of being manipulated by the Islamist-inspired Ennahdha party, which he has been trying to marginalize since his July coup.

The concern of Tunisia’s partners

Although he denies any desire to interfere in the functioning of justice, his decision to dissolve the CSM has earned him a salvo of criticism because of the doubts it casts on the independence of justice. The ambassadors of the member countries of the G7 and the European Union (EU) in Tunisia thus said, on Tuesday in a joint press release, “deeply concerned” by this measure. “A transparent, independent and efficient justice as well as respect for the principle of separation of powers are essential to the proper functioning of a democracy at the service of the people, based on respect for the rule of law and fundamental rights and freedoms”, added the heads of mission of the embassies of Germany, Canada, the United States, France, Italy, Japan, the United Kingdom, and the EU delegation.

Read:  Ukraine: what is the tactical nuclear weapon, this option for Putin, particularly feared?

Their press release was published a few hours after similar criticism of American diplomacy, yet often inclined to give President Saïed the benefit of the doubt since he monopolized powers. “An independent judiciary is a crucial element of an effective and transparent democracy. It is essential that the government of Tunisia honor its commitments to respect the independence of the judiciary in accordance with the Constitution,” said State Department spokesman Ned Price. In Geneva, the UN High Commissioner for Human Rights Michelle Bachelet also deplored the dissolution of the CSM, saying that “it is a big step in the wrong direction”. “The dissolution of the Superior Council of the Judiciary is clearly in violation of Tunisia’s obligations under international humanitarian law,” she added in a statement.

For the NGO Amnesty International, the dissolution of the CSM “is a serious threat to the independence of justice and to fair trials in the country”. “Since July, President Saïed has dismantled practically all the organs of control of his power. The CSM was the last bastion of judicial impartiality,” Amnesty said in a statement.

The country in turmoil

After the president of the CSM, Youssef Bouzakher, who described President Saïed’s decision as “illegal”, the Association of Tunisian magistrates raised their voices on Tuesday, denouncing the dissolution of the CSM as “a flagrant violation of the separation powers in a democratic regime. To protest against this measure, the Association announced a strike by magistrates “in all the courts of the country on Wednesday and Thursday”, as well as a rally on Thursday in front of the headquarters of the CSM, to which the Tunisian police blocked access. .

On the side of the political actors, Ennahdha condemned the decision of the Head of State and accused him, in a statement, of “seeking to get their hands on the judicial system to use it to eliminate his opponents policies”.

“I have no intention of taking the reins of all powers”

“I would like to reassure everyone in Tunisia and abroad that I will not interfere in the work of justice and that I resorted to this dissolution only because it had become necessary”, Kaïs still defends himself. Saïed, Monday evening, in response to criticism. “I will not interfere in any case or appointment. […]. I have no intention of taking the reins of all powers”, he added, saying that the CSM had been instrumentalized by some “for personal or political ends”. “All my concern is about designing a Constitution that flows directly from the will of Tunisians, and not one that is tailor-made,” said President Saïed. According to him, other challenges are currently of absolute priority, in particular the emergence of phenomena such as the lack of supply of certain primary consumption products, in addition to the increase in drug trafficking and failures in the nationwide distribution channels. Despite these promises, critics of the Tunisian leader see in his decision a new drift. This fuels fears of a return to authoritarian rule in the country, which triggered the Arab Spring by overthrowing the dictatorship of Zine el-Abidine Ben Ali in 2011.