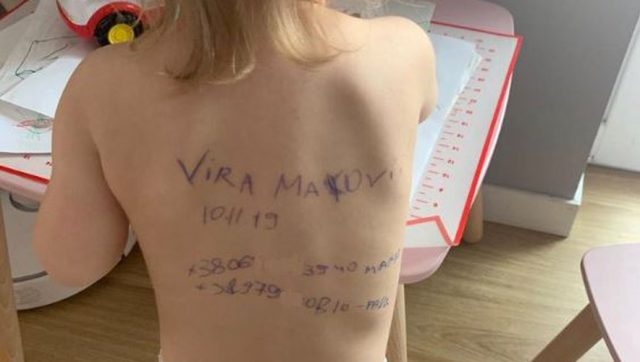 The family of little Vira, whose photo has gone around the world with her parents’ phone numbers on the back, lives in Lespignan in Hérault after fleeing the horrors of war in Ukraine.

The photo of Vira, the little Ukrainian girl, with her parents’ phone numbers written on the back has gone around the world. Hundreds of thousands of internet users were moved by this shot. A chilling photo testifying, from the start of the war, to the dangers and fear of which the Ukrainians were victims.

Vira, Aleksandra, her mother and Vitaly, her father, not forgetting her grandmother who arrived last week are safe today in Lespignan, taken in by the Delorme family.. I couldn’t write anywhere but on my back so much I was shaking

“From the first days of the war we fled kyiv, explains Aleksandra, more serene today. The sound of bombs was incessant. We did not know what to do. identification with the population. We were terrified. For fear that Vira would find herself alone, I wrote my name and that of Vitaly on her back, as well as our telephone number. We were afraid of being separated. Of being killed. I did it on my back because I was shaking so much I couldn’t get it on her arms Then I took the picture and shared it on social media telling all the moms to do the same because we also know that children are abducted.”

Aleksandra and Vitaly are artists. She painter and he sculptor. They have exhibited in many European countries.

What mattered above all was to live

In kyiv, they left behind them a nice real estate heritage probably destroyed by the bombings. They had never imagined that all these Russian soldiers would one day cross the border. In addition, the authorities reassured the population.

“What mattered above all was to live, insists Aleksandra. We crossed Ukraine, then passed through Moldova where we rested for a few days before leaving through Poland to France. We had taken 20 hours to walk 11 km because we had abandoned our car. My husband had taken language trips to France, not far from Maubeuge. We called the family who received him at the time. They told us to come right away.”

Very quickly, Aleksandra’s family realized that the couple could not keep them for long. Not for lack of space or will. But because they were old and the arrival of so many people suddenly disrupted their daily lives and made them tired.

“We were always in contact with people who took care of taking the refugees to other countries and we were put in contact with the association of volunteers from Lespignan. As soon as they learned of our situation, they came pick us up. It was all done in a few days.”

The little family was taken care of by the association of village traders and accommodated in an apartment with a view of the Canigou. The grandmother joined them last week. She lived right next to the Antonov air base which was completely destroyed by the bombardments. She slept in her bathtub to protect herself from possible bombs.

“When we arrived in Lespignan (Six refugees in total, editor’s note), we were a little lost. But there is so much warmth and heart here that we could only feel good.” Aleksandra suddenly displays a sad and closed face.

From tears to laughter

“We left my grandmother there, who knew hell in the USSR but refused to leave Ukraine, my father and my sister-in-law.” She has tears in her eyes.

Then we talk about the destruction of the flagship of the Russian fleet. And there, Aleksandra’s face lights up again. She goes from tears to laughter.

“We little Ukrainians, with our little means, we did this. It was unimaginable. It’s terrible, but we felt immense joy. With all this, reconciliation between our two peoples is unimaginable. Putin wants to erase Ukraine. He wants to kill his people, make his language disappear. The Russians don’t want to know what’s happening to us or the atrocities we’re going through. This suits them because a majority of them dream of returning to the USSR. We Ukrainians don’t want to relive those years of oppression.”

A few days after arriving in Lespignan, Vitaly found work. As he speaks a little French, this facilitates the process. He went back to Ukraine to get his car so he wouldn’t depend on anyone for his trips. Little Vira will be back to school after the holidays.

“They are incredibly kind and grateful, says Florence Delorme who welcomes Vira and her family. In Lespignan everyone helps them. There is an incredible surge of heart. As soon as the war started, everyone mobilized. We can be really proud of our village.”