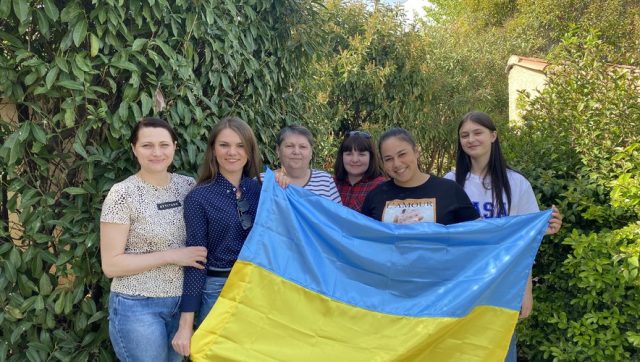 Since the end of February, the watchword in Béziers has indeed been “solidarity” with Ukrainian refugees.

Between the collection of donations at the Raoul-Barrière stadium (every Wednesday from 10 a.m. to 6 p.m.), involving several convoys to the Polish border, the reception of 150 refugees in just over a month; the convention center transformed into a place of transition for Ukrainians; the hotels of the many surrounding municipalities which voluntarily make rooms available before the start of the summer season; the voluntary associations that struggle to help those who have had to give up everything to flee the war; the merchants of the Polygon who offer a check for 1,000 euros to the CCAS just yesterday morning… One thing is certain, the title of Stephen King’s book, Walk or die, is far from being applicable to Biterrois.

When they arrived in France, the Ukrainian refugees had only the bare necessities with them. In their few suitcases or just big backpacks, they only had winter clothes, the climate being obviously very different between their country of origin and Biterrois.

As the warm weather approaches, CCAS volunteers, the municipality and host families are looking for summer clothing and shoes, for men and women, in good condition. Of all sizes and for all ages. To do this, you have to go to the popular rescue from Monday to Friday, from 8 a.m. to 12 p.m.

In Villeneuve, eleven refugees housed at the hotel Le Pavillon

Arrived in Béziers on March 31, eleven Ukrainian refugees were directed to the hotel Le Pavillon, in Villeneuve, where they are taking their bearings, far from home. Meet.

“Hurry ? Newspapers?“As soon as she enters a room at the Le Pavillon hotel in Villeneuve-lès-Béziers, where six Ukrainian women spend their days, Olena tries to practice French.

This 31-year-old young woman, originally from kyiv, notary and mathematics teacher at the same time, boarded one of the many buses that would take her to Biterrois territory. The journey was long.

With a departure on March 28 from the Ukrainian-Polish border, the bus would transport fifty refugees for three days, crossing Poland, Germany and Holland. Along the way, two-thirds of the workforce went down to Poland. The remaining third arrived in Béziers then was distributed by the City and the CCAS in Villeneuve-lès-Béziers, Corneilhan or Cers.

Alongside Olena, six adults and four children. No one knew each other before. Yanoslava and Natalya, 41 and 31 respectively, are from Lviv on the Polish border. Aleksandra, a 32-year-old florist, her husband and three children came straight from the east of the country. Nina is a 60 year old retiree. Liubov and his 15-year-old granddaughter Ksenia fled the country from the Ukrainian-Russian border.

Read:  TV series: "Confidential Algiers" is given on Arte

Since their arrival, the eleven refugees have been taken care of by the Béziers Dean Lions Club. They are constantly struggling to make life easier and better for these Ukrainians. “For the moment, we have been able to accommodate them at the hotel Le Pavillon. They have access to a room in which they can cook and drink coffee. But from May 31, they will have to leave, since the establishment’s season is starting.”explains Frédéric Ramond, president of the club.

“School the four children and find work for the seven adults”

“The most important thing at the moment is to send the four children to school and to make the seven adults work. Two of them are already employed in the hotel. The children should go to school quickly in high school Marc-Bloch de Sérignan for the three older ones, and at Villeneuve primary school for the youngest“.

School supplies as well as meals in the canteen will be covered by the establishments. “One less weight” for the two parents and the grandmother of future students.

“Psychologically, they are bad”

On a daily basis, the refugees communicate in Russian with Émilia, the companion of Frédéric Ramond, who translates constantly. “Psychologically, they are bad. They all need support, whether they are children or adults. We must not forget that they had all taken refuge in bunkers before coming to France“, Supports Emilia.

At their side, the Lions club is trying to find a solution to assign them psychological aid, but the task turns out to be more difficult than expected. “Obviously, the black point is the language barrier. But we are not giving up. They’ll get all the help they need“, adds Frédéric Ramond.

As the days go by, the refugees discover

None of them had ever set foot in France, and even less in Biterrois. But “they really like it here. They are captivated by the architecture of Béziers and have an indisputable ease in finding their bearings.“, say Émilia and Frédéric.

Every day, Nina, a former employee at a nuclear power plant in Ukraine, escapes. “It is the most autonomous of all. She leaves early in the morning, takes a bus and goes to visit the surroundings. Alone, with her little backpack“, testifies Claudine, member of the club.

Read:  Shooting in Texas: "We should not expect anything from this tragedy"

The sexagenarian, passionate about green spaces, hopes to find a job in this branch. “Apart from what they would be able to do on their own, it happens that we take care of them at home, for meals or to drink coffee with our little family. We organize trips to the beach, in Spain, etc“

They are nearly 150 Ukrainians to have put their suitcases in the agglomeration of Biterroise. Since their arrival, the Communal Center for Social Action (CCAS) in Béziers and various voluntary associations have taken care of those who have been forced to leave their whole life, their family, their work. And so that they feel integrated as much as possible, the CCAS helps them on Tuesdays, Wednesdays and Thursdays, from 2 p.m. to 5 p.m., at the Verdier foyer.

“We help them open their bank account, we direct them to vaccinations for themselves as well as for their pets. We also guide them regarding insurance, the steps to take to obtain their papers from the prefecture. And upstream , we offer them above all an activity that brings them together, no matter where they are staying at the moment, around tea, coffee and cupcakes”, supports Nathalie Clutot, the director. Once a week, the CCAS also offers one hour of French lessons, with volunteer teachers in neighborhood centres, at La Trinité and at Maison Verdier, in order to help them make themselves understood, and especially to be able to resume the way to employment as soon as possible.

In this regard, several have already managed to find work. Apart from the two employees at the hotel Le Pavillon), Nathalie Clutot confirms that some adults have already managed to get hired. “There are some who have been employed in campsites, others at Passerelles or at Domitys. These are the ones who manage the best in French”.

The schooling of children, a priority

Very often, men and women came to the territory with their children. For the City and the CCAS, the most urgent thing was to educate them, so that they can find a social life as soon as possible. Since then, many have joined primary and nursery schools in their neighborhood, and voluntary high schools.

In Corneilhan, a cocoon to land

About fifteen refugees are accommodated in two houses in the village. Women and children have found a little peace there after a forced departure. They try to recover.

“It’s the family house. It dates from 1850, explains this resident of Corneilhan who did not hesitate to open its doors to a family of Ukrainian refugees, who arrived on March 18 in Béziers. My grandfather always put a plate in addition, for the welcome. It’s the tradition. This house is never rented, friends pass by. It was normal to make it available to Ukrainians.”

Eleven people, women and children, have therefore moved in and another small part is staying with neighbours. Solidarity was organized in the village, in conjunction with the town hall.

“Here, they have found tranquility, even if they were still very stressed when they arrived. They are in constant contact with their loved ones who remained there.” Young children, twins, acclimatize and become less shy. The eldest, Lilia, 9, started school in the village and already has friends.

“The people in Romania where we stopped off, like in Béziers or here, are very welcoming and protective. It means a lot to us,” explains Victoria, one of the young women who already speaks French for having been an au pair in Paris.

And the young woman noted: “Finding yourself at war today is incredible. I can’t believe it’s true to have left our house, to have left like that.” The family originated from the Dnipro region. An uncle stayed behind to help the refugees move. “It’s dangerous. My mother’s parents, who were too old, didn’t want to go with us. And now it makes me anxious to know they’re there.”

Victoria is upset. She broke ties with her Russian friends. “They don’t believe us when we explain what is happening in Ukraine. All the abuses committed by Russian soldiers against civilians. Of course Putin is a terrible guy, but he is not the one who kills or rapes on place, it is indeed the Russian soldiers.”

And to be enthusiastic about President Volodymyr Zelensky. “We voted for him and we are damn happy to have a man like him at the head of the state. People love him, he will be re-elected without any problem!”

The young woman who worked in a bank in Ukraine while managing a coffee-shop with her sister, hopes to quickly find work in France and wishes to integrate as well as possible during the stay. “We don’t know if it will be long. Surely. We will only leave if we are safe.”

Everyone is entitled to their chocolate. On the occasion of the Easter weekend last week, the Ukrainian refugees housed in Biterrois territory were not forgotten. The Mercier chocolate factory has generously created and offered chickens and chocolate eggs for children up to 18 years old, in partnership with Galeries Lafayette.

These small packets were redistributed by the CCAS of Béziers, to all parents and children registered on the lists. “Parents and children are happy and grateful to have had these chocolates. We must not forget that the goal is for them to integrate as well as possible, like you and me”, recalls Nathalie Clutot.