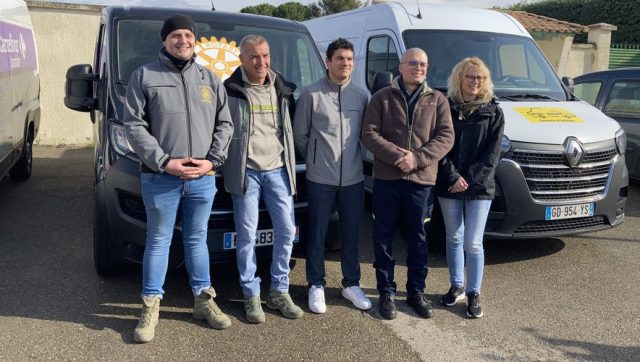 Beaucairois, a Ruthénois and a Frontignanaise traveled several thousand kilometers to deliver three truckloads of donations intended for Ukrainian refugees.

Mission accomplished for Vincent Sanchis and his teammates who led a convoy of basic necessities to Ukrainian refugees. After ten days of journey, they returned exhausted on the evening of Sunday March 20, before returning to work the next day.

Leaving on Thursday March 14 from Beaucaire, the six team members – led by the person who is also responsible for the general funeral agency in Beaucaire, passed through the Czech Republic to arrive on Wednesday March 16 in Košice, the second largest city in Slovakia term of population, their place of destination. “We were received by Deniza Sklenarova, a member of the local Rotary club”. The next day, “she showed us around the three reception centers for Ukrainian refugees”explains the Beaucairois.

Tormented by a scene

One of them, near the station, managed by the City, provides refugees with sanitary facilities, rest beds, a large canteen to eat and stock up on hygiene and basic necessities. . “Given the needs, we left four trolleys of hygiene products there. The volunteers were very moved, they wanted to take a picture with us. And that’s when a little Ukrainian girl came to stand in front to be sure the picture”says Vincent Sanchis, still in shock at the joy of this young refugee.

They then went to a second centre, managed by the Region, which has a logistics base for donations. “We left the food part there”continues the Beaucairois. “That’s when we saw a little girl in the middle of a fit of hysteria who was banging her head on the floor”he remembers, still tormented by this scene.

“We may be the last people they see…”

There remained the medical part brought by the Beaucairois convoy. The Gardois loaded the 16 m3 of equipment into a truck which was to leave for Kharkiv, the 2nd largest city in Ukraine. “That’s where I had the most moving encounter of this adventure.” This meeting is that of Andriy, “a Slovak of Ukrainian origin and investment project manager who gave up everything to help his compatriots”. This member of the Rotary Club of Košice and former governor of Rotary in Slovakia took care of the diplomatic convoy to secure the delivery of donations.

A crazy journey according to Vincent Sanchis. “The tank had been filled at the start, because refueling is limited to 20 l in petrol stations in Ukraine, and for their safety, they are forced to take secondary roads and drive without stopping!” All this in four days. “The drivers should have arrived yesterday”he worried two days after his return to Beaucaire, haunted by the words of Andriy: “We may be the last people they see…” The Slovak did not fail to paint a picture of the situation and to thank the generous donors from Gard (video below in English).

Finally, it was not until the following Saturday, after a long and difficult journey of a week, that the truck was able to reach its destination and unload its precious cargo of 16 m3 of medical equipment at the hospital in Kharkiv. A material that has found rapid use as the needs are great.

“In the evening, I cracked!”

Fatigue helping, combined with an overflow of emotions stored during this busy day, “in the evening, I cracked!”, admits this big guy. Saying that every evening, he did a debriefing with his teammates to try to evacuate the stress of the day. “That evening, we were all overwhelmed, but satisfied because this mission went beyond our expectations.”

The following day, Friday March 18, they traveled to Vyšné Nemecké, on the border between Slovakia and Ukraine. “We were on the front line.” With the first bombardments 50 km away. And there they saw the human drama. “All the children were in ski suits and après-ski shoes with a small backpack, the mothers sometimes with a suitcase, the atmosphere was very heavy”portrays Vincent Sanchis.

“We return changed and grown”

He sets the scene. A tent for the psychological care of refugees, who are then transferred to the center in Michalovce. Next to it, a police station where they are registered and where the administrative formalities are done. “We were asked how long we could stay, as the need for help from volunteers is huge.”

Back at work, Vincent Sanchis found his lot of emails to read by opening his computer. “With such an adventure, you come home changed and grown. On site, I discovered my level of sensitivity”he acknowledges. “So, we tell ourselves that here nothing is urgent…”

“There is still something to do”

After the return to daily French reality and despite this feeling of powerlessness in the face of tragedy, “we are preparing for the future“, blows Vincent Sanchis, certainly marked by this Slovak episode. “Our observation is simple: all the big countries that host Ukrainian refugees have big organizations.” The situation in Slovakia is quite different and does not leave the Beaucairois insensitive. According to him, this small country of barely 5.5 million inhabitants is “abandoned”. “There is really something to be done to help all volunteers”he says. “We have a huge project, which we still have to mature, but we are ready to do anything to get there!” Vincent Sanchis should also announce a new initiative within a few days, this time on a larger scale.