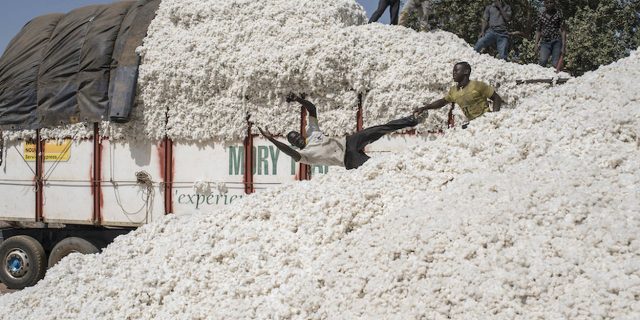 PBenin’s leading economic sector, cotton represents and generates more than 40% of jobs in rural areas and supports around 50% of the population. The sector also represents 45% of the country’s tax revenue. From the rank of fourth African cotton producer that it still occupied in 2016, Benin, following a few adjustments, had achieved the feat of becoming the number one producer of white gold in Africa, ahead of the ex-champion: Mali. “With an industrial park of 23 ginning factories, the cotton sector represents 60% of Benin’s industrial fabric,” Trade Minister Shadiya Alimatou Assouman said at the launch of the 2021-2022 cotton marketing campaign. It must be said that the transformation of cotton fiber remains one of the major challenges for the Beninese authorities, in order to obtain more added value for local consumption but also to maintain the good level of exports which allows the country to garner 40% of its foreign exchange earnings and to ensure 13% of the gross domestic product.

A strong desire to create added value on site

In Parakou, one of the major cities in northern Benin, locally produced cotton was transformed at the Benin Textile Complex into khaki fabrics, towels and a few models of purely “made in Benin” clothing. Given its dilapidated facilities and its regular losses, the structure was liquidated when President Talon was elected. A stone’s throw from the remains of this production unit was the Cotton Development Company (Sodeco). At one of the entrances to Sodeco’s ginning factories, you can see several hundred large trucks and gigantic tarpaulins placed on mountains of cotton.

“In the area of ​​the West African Economic and Monetary Union (UEMOA), agro-industry, which is the way for a better exploitation of the value chains of the cotton sector, is practically non-existent. To build a productive, competitive and resilient cotton sector, it is important to add value locally. The government of Benin does not want risky investments in the sector”, points out the Minister of Agriculture, Gaston Dossouhoui. Upstream, the government has endeavored to ensure attractive tax exemption conditions in parallel with the guarantee of correct energy conditions for potential investors. This is how the Glo-Djigbé Industrial Zone project was born.

A zone set up to arm oneself industrially

A public-private partnership between Benin and ARISE Integrated Industrial Platforms (ARISE IIP), of Indian industrial ecosystem co-founder and promoter Gagan Gupya, has implemented a pilot program for traceability of the production chain of garments and spinning mills textile production units at the Glo-Djigbé Industrial Zone (GDIZ).

Scheduled to be operational in 2022, the Glo Djigbé industrial zone (GDIZ) is located 45 kilometers from Cotonou. “This Special Economic Zone is designed to be a modern industrial park that meets the highest environmental and social standards. It is intended to provide services to different industries, making it a‌ ‌zone‌ ‌multi-sector‌ ‌integrated‌ ‌focused‌ ‌on‌ ‌the‌agribusiness‌ around the local processing of cashew nuts, pineapples, shea nuts and soybeans, ‌ ‌as well as‌ ‌cotton‌ ‌local‌ ‌en‌ ‌textiles,” explained Laurent Gangbes, Director General of the Agency for the Promotion of Investments and Exports (APIEx) Benin.‌

This zone is expected to attract at least $1.4 billion in investment during the first phase and create more than 12,000 jobs. The objective of this project, the first of its kind in Benin, according to the authorities, is to maximize the economic potential of natural resources such as the aforementioned cash crops. It is part of the catalog of 342 projects of the second phase of the Government’s Action Program 2021-2026, a $20.8 billion program designed to support Benin’s economic and social development with positive impacts on living conditions of the people.

Read:  Global emotion after the death of little Rayan

A special effort put into traceability

By buying a garment made of cotton in London for example, we will be able to say that the cotton used for its manufacture comes from such a commune in Benin. This traceability will increase the value of Beninese cotton on the international textile market. “Thanks to this partnership with ARISE Integrated Industrial Platforms (ARISE IIP), Benin will be positioned at the forefront of textile innovations and technologies, in improving visibility, resilience, competitiveness and the creation of a thriving agricultural value chain,” the firm said. By the end of 2023, the country, which will have spinning and dyeing factories, will have a processing capacity of 98,000 tons of cotton lint per year.

Tracing, verifying and auditing the life cycle of garments, from spinning to store, and sharing the entire journey of high quality Beninese cotton with the end consumer, this is what this program aims to create the first chain fully traceable cotton sourcing. “Soon, there will be enough to move the lines in terms of the development of the textile industry. The development of this industry aims to improve outcomes in the cotton value chain and enhance the unrevealed values ​​of cotton by-products,” said Shadiya Assouman, Minister of Commerce. From now on, ARISE IIP aims, according to its leaders, to ‌make‌ ‌pass‌ ‌Africa‌ ‌from the status of ‌supplier‌ ‌global‌ ‌of‌ ‌raw materials‌ ‌to‌‌a‌global‌‌‌‌ manufacturing power. Enough to make cotton grown in Africa more visible to the global textile industry. For information, ARISE IIP is already present in Gabon with the Special Economic Zone of Gabon (GSEZ), in Togo with the project to build a cotton factory on the site of the Adétikopé Industrial Platform (PIA), but also in Côte d’Ivoire and Chad.

Reforms that made the difference

The various players in the white gold sector all argue that the state has not put enough resources into the cotton campaign since 2016. What then is the secret of the prowess recorded at the continental level? More than 700,000 tonnes of seed cotton have been produced since 2019. This feat confirms that the authorities were not mistaken in entrusting the Interprofessional Cotton Association (AIC) with the management of this sector, which has jumped 123% since 2015. Reforms in the sector began with the return of cotton management to private specialists upon the accession of President Patrice Talon, through the reinstatement of the framework agreement between the government and the AIC. And yet, Beninese cotton comes from very far away.

“After years of political abuse where the real actors were pushed aside, cotton was in a sort of coma. Thanks to a medical specialist, the current president, who knows the industry well, white gold has seen its salvation and is regaining color,” said Mathieu Adjovi, president of the AIC. The managers of the AIC, made up of producers and ginners, worked, once rehabilitated, to go back in time by dealing with the most urgent matters. It is a question of containing or even annihilating the effects of the delays which threatened the 2016-2017 campaign. Tours were made in the country’s cotton basins.

From Akplahoué to Banikoara via Klouékanmè, Djakotomey, Dogbo, Kétou, Adja-Ouèrè, Dassa-Zoumè, Djidja, Parakou, Djougou, Kandi and many other communes producing white gold, cotton growers, who were discouraged , had to be remobilized by cotton officials. With 451,209 tonnes of cotton produced in 2017, Benin had just beaten its own national production record, in particular that of 427,153 tonnes for the 2004-2005 cotton campaign. This is the first performance recorded since the takeover of cotton by the Interprofession. The enormous progress noted is above all the result of rigor in cotton management with the timely and sufficient availability of seeds and fertilizers to cotton producers with yields of 1,073 tonnes in 2020 to 1,200 tonnes in 2021 at the hectare. Anything that improves the producer’s income.

The professional cotton organization has also ensured the supervision of producers on technical itineraries, the repair of certain rural tracks to facilitate the marketing of the product and the approval of the sale price of inputs and the purchase price. seed cotton to producers, in short to satisfying the demands of cotton producers. The Minister of Agriculture, Gaston Dossouhoui, talks about the implementation of good quality inputs: “First the seeds come from our selection. We have made choices which, in terms of fiber, capsular weight, quality, whiteness, length and tenacity of the silk, give good performance that ginners and spinners have also appreciated. »

“The government has rehabilitated the Interprofessional Association of Cotton, which has taken over the reins of cotton by making the families of the interprofessional organization work”, indicates the person in charge of Agriculture in Benin. “Today, farmers have understood better than anyone else that we need to manage ourselves better, to take charge of ourselves. Cotton growers and producer organizations have all been settled. As a result, the living conditions of cotton growers have improved,” he continues. That said, we had to go further.

In 2017 alone, it was estimated that up to 117 billion CFA francs had already been paid by the Interprofession to the more than 300,000 families producing cotton, i.e. around two million people directly or indirectly impacted by the sector. Alou Djoulé, cotton grower from Kandi, one of the cotton-producing towns in North-East Benin, testifies to the evolution of his production. “During the 2015-2016 campaign, I had made around 500 tons and for the 2017-2018 campaign, I had made 2,142 tons. »

The satisfaction of cotton growers has been high since the 2016-2017 campaign, according to the president of cotton growers, Gani Badou Tamou. “We regularly receive the money from our sales. Late payments do not last more than 10 days,” he specifies. Boosted by the record figures recorded for three years in the sector, the players are setting the bar even higher for this new agricultural campaign. AIC bets on a 5% increase compared to previous production and announces a production of 766,000 tonnes in 2022.

On the side of the authorities, we remain optimistic. “We don’t have the biggest acreage when it comes to cotton production, but we have the best technologies, a better approach to monitoring our cotton plantations. The other countries have decided to steal the limelight from us by increasing the price per kilo. It’s all fair game,” says Minister Dossouhoui.

Given its importance in the socio-economic life of the country, the authorities think that it will be necessary to unite with the other African producing countries in order to stand up to unfair competition from the developed countries because of the subsidies provided to their producers. National seed cotton ginning capacity increased from 612,500 tons to 832,500 tons for the 2021-2022 campaign. The current objective of actors in the cotton sector in Benin is to achieve a new record production of one million tonnes of seed cotton during the 2023-2024 campaigns. What to keep the course and the good.