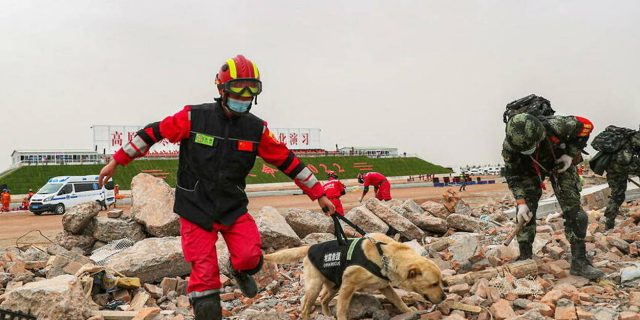 Lhe earth shook in Sichuan, a region in southwestern China, on Wednesday. The provisional report shows one dead and six injured following a magnitude 6.1 earthquake followed by an aftershock. Videos posted on the Internet by local media show chandeliers dangling from the ceiling, rockslides, rock debris on the roads or false ceilings falling to the ground.

This first earthquake was followed three minutes later by an aftershock, of magnitude 4.5, in the neighboring county of Baoxing, according to the CENC. The first human toll from these earthquakes reported “one dead, one seriously injured and five slightly injured,” said public television CCTV. Hundreds of doctors, firefighters, soldiers, first aiders and police were deployed “for search and rescue operations, care for the injured, unblocking of roads and transfer of residents to a safe place,” the channel said. Buildings were damaged, but authorities are not aware of any collapsed buildings so far, Sichuan firefighters said.

The tremor was felt in several cities in the province, including Chengdu, according to comments from Internet users on the Weibo social network. The United States Geological Survey (USGS) rated the magnitude of the earthquake at 5.9.

Sichuan, very mountainous and known worldwide for its panda reserves, is generally hit several times a month by earthquakes of varying intensities. Last September, three people died in this province during an earthquake and at least 10,000 people were displaced. In May 2008, a very powerful earthquake, of magnitude 7.9, left 87,000 dead or missing, still in Sichuan.