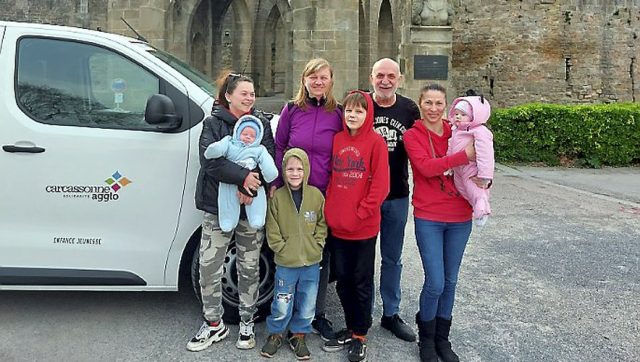 Carcassonnais brought back seven new refugees: three mothers and their four children. At the Ukrainian-Polish border, the best organization involves providing guarantees of care, but Gérard Sanz is also worried about the future of donations made by volunteers.

Kilometers don’t matter to him. In less than a month, Gérard Sanz has already made two round trips between Carcassonne and the Ukrainian-Polish border. The first trip took place in early March: the Carassonnais and his sidekick Jean-Pierre were able to bring back seven refugees, aboard a minibus provided by Carcassonne Agglo.

Barely time to catch his breath when the person concerned announced his intention to return there: last Thursday, March 24, Gérard and Jean-Pierre were back on the road. They returned this Monday, March 28… and for the second time, mission accomplished.

“We were able to raise enough funding to leave again with the minibus and return with seven other people.” Three mothers and four children, including two babies aged six months and a month and a half. Hosted in Trèbes at first, all should be relocated in the coming days.

“On the way back, we stopped at a hotel near Strasbourg which was top notch, says Gérard. They gave us the tourist tax, breakfasts… A great solidarity”. But if this general impulse to help Ukrainians fleeing the war is undeniable, it can also sometimes serve as a front for malicious people. What the Carcassonnais discovered when he arrived in Poland.

“Things had really changed since my first trip, he says in effect. Previously, anyone could go to the border and leave with refugees. Except that people have disappeared, we do not know where they have passed. This raises the specter of prostitution networks and human trafficking in particular. As a result, the institutions have tightened the screw, and you really have to show your credentials in order to be able to take care of people arriving from Ukraine” .

A very good thing, of course, but which almost derailed this new journey: “As an individual, if you don’t have an association behind you, it is now out of the question that you leave with people”. Gérard Sanz will call in extremis on the Trébéenne Natasha Svistilnitchenko, who has transformed his establishment la Gentilhommière into a real reception center for refugees, in order to provide all the guarantees of seriousness and above all of protection vis-à-vis the family that he was about to take over.

“I was also able to see that there were half as many people at the border: still for security reasons, they are sending more and more refugees to Warsaw.” Despite this, Gérard and Jean-Pierre will fortunately not have made this trip for nothing, also bringing a large quantity of donations and basic necessities. Except that here again, generosity happens to be the target of certain excesses.

“Every day, hundreds of people arrive from Ukraine, fill whole bags with donations, then leave. Everything is on the ground, in boxes, anyone can help themselves! When you see people taking twenty times the same article, or come back two or three times in the same day, hard not to think that all that is resold on the other side of the border…”

It would take more, however, to dissuade Gérard from continuing his action: the man is already saying he is ready for a third round trip. “But for that, of course, I would need new funding… and the people who have already helped me are not going to do it every month!”

The Carcassonnais hopes that new patrons will come forward, stressing the importance of an above all human approach: “Among the people we brought back this time, there is also a 6-year-old child. At the beginning, he had the look completely empty. But over the course of the journey and the stops, he became happy again and smiled again. For that alone, the trip was worth it”.