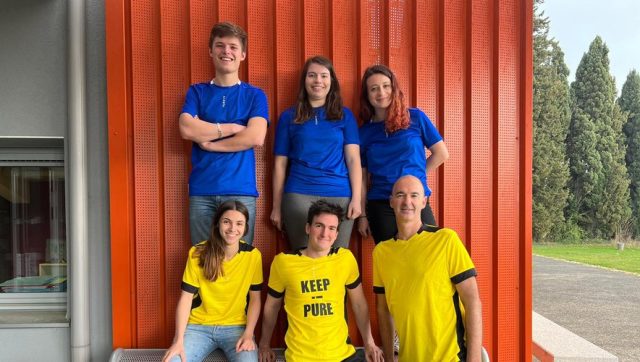 The director of the Avignon school of osteopathy, father of two young people of Ukrainian origin, and his student musicians embarked on this adventure to show their support.

From a personal story was born a collective action in the form of a song for Ukraine: “Song for liberty”. It all starts with that of Aymeric Le Nohaïc, director of the Avignon school of osteopathy, where he writes songs for the group of musicians formed with the students, Keep It Pure.

This songwriter is also the father of two children adopted in Ukraine when they were small and who, today, are young adults. Tom, the eldest, was born near kyiv and Charly, the youngest, near Donetsk.

“On the first day of the war, missiles were launched at the place where Charly was born. The latter sent me an email with these words: How lucky we are to be here!” says Aymeric Le Nohaic.

The father of the family was very touched by this situation and imagined what could have happened to his sons: “They could have been enlisted in the army with a Kalashnikov in their hands…”. This situation disturbed him a lot and, as an outlet, he put into words what was on his heart. “It was necessary, I needed to free myself from these very strong emotions!” he explains.

A violinist on an international tour

He then sent his text to Clara Olmière, a student but also a musician, who set the text to music. In forty-eight hours, the song existed.

The other students in the group immediately joined in this new song. Even the school secretary joined the group for the backing vocals in this collective achievement.

Another recruit and not the least: Charly knows a Ukrainian violinist, Katerina Rossa, who plays in a symphony orchestra and who was then on an international tour. She agreed to do a violin solo which was incorporated into the song. “The song is aimed at Putin, how can one man mess up the lives of all of us?”, with this conflict, which has international repercussions.

The objective of Aymeric Le Nohaïc, Clara and the entire group of musicians is above all to make a song for solidarity. “We asked ourselves the question: how could we generate donations with our song? This is how a link to an online kitty is indicated from the video of the song “Song for liberty” by the group Keep It Pure.