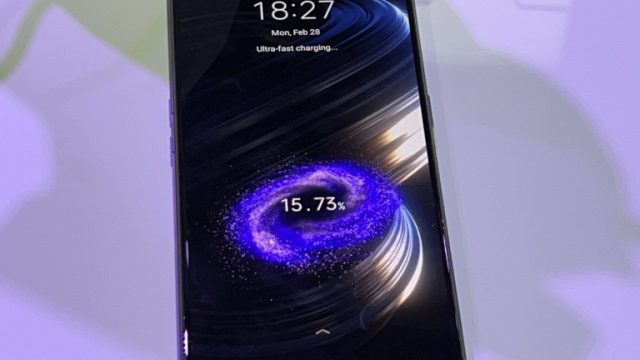 News hardware 50% battery in 5 minutes of charging: this will soon be possible on smartphones

Fast charging is a crucial issue for smartphone manufacturers and everyone competes for energy so that the user never runs out of battery. The Chinese brand realme is taking advantage of MWC 2022 to present its first 150-watt charger… which will recover 50% of the battery in just 5 minutes. A record.

For several years now, the manufacturer of Android smartphones has continued to offer faster and faster charges. It is no longer rare, in fact, to charge your device with a 65W block, capable of completely reboosting a smartphone in one hour. But realme has decided to go much further, being the first to draw a 150 watt recharge on a commercial product.

The Chinese brand is not the first to put forward this kind of ultra high figure, since Xiaomi had made a demo at 200 watts last year, with a battery capable of recharging a smartphone in 8 minutes, without however concretizing it on a existing smartphone. Realme announces that its next smartphone, the GT Neo 3, will be the first to benefit from a 150-watt charge.

Read:  War in Ukraine: the UN, "a system out of breath"

The manufacturer has worked for several years on this ultra-fast charge which it calls “UltraDart”, in order to ensure several important points. With a load at 150 watts, one can legitimately fear a limited battery life. Realme ensures that this will not be the case with its UltraDart technology: in addition to charging up to 50% in just 5 minutes, the company has ensured that the temperature during charging remains below 43°C in order to limit the long-term impact. Realme conducted long tests and achieved a capacity loss of only 20% after 1000 full charge cycles. By imagining that you recharge your smartphone once a day, you will be quiet for almost 3 years before your battery starts to show signs of weakness.

Never run out of battery again?

In short, if the promises are kept, realme’s 150 watt charge promises to change a lot of things. On the manufacturer’s stand at Mobile World Congress, a demo was presented on a “prototype” smartphone and a relatively bulky charger compared to smartphone standards. However, the brand does not specify how long it will take to complete a full charge cycle (the start and end of the charge being generally longer). Anyway, with this kind of technology, running out of battery should be more and more rare.