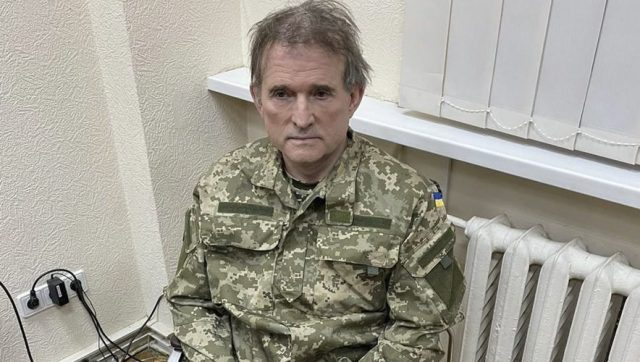 The Ukrainian authorities have announced that they have arrested Viktor Medvedchuk, a particularly influential man and close to Vladimir Putin, on Tuesday April 12. President Zelensky hopes to be able to negotiate his exchange with Ukrainian prisoners.

MP, businessman, Viktor Medvedchuk is an influential man. This 67-year-old Ukrainian is above all one of the personalities closest to Vladimir Putin on the territory. At the time of the Russian invasion, he had quickly fled, but this Tuesday, April 12, the Ukrainian authorities announced his capture.

On his Facebook account, Volodymyr Zelensky shared a photo of the oligarch in military uniform and handcuffed, congratulating the special operation that led to his arrest.

A little later, the Ukrainian president proposed a prisoner exchange in which Ukrainian prisoners of war held by Russian forces would be exchanged for pro-Russian politician Viktor Medvedchuk. During a speech, Volodymyr Zelensky indeed declared that it was “important for our security forces and our army to consider such a possibility”.

According to BFM, this very influential lawyer had also been under house arrest since May 2021 after being charged with “high treason” and “attempted looting of natural resources in Crimea”.

At the head of a fortune of 620 million dollars according to Forbes, Viktor Medvedchuk is also the twelfth fortune of Ukraine and has supported its proximity to Russia by founding a pro-Russian political party, banned from sitting in parliament shortly after. the start of the war.

Moreover, Viktor Medvedchuk would also be the godfather of one of Vladimir Putin’s daughters. The Kremlin has so far not reacted to the announcement of this arrest, nor to the exchange proposal launched by the Ukrainian president.