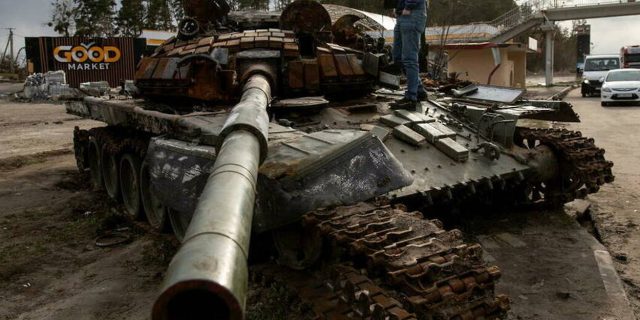 Von Friday April 15, Russia announced that it had destroyed an arms factory in the suburbs of the Ukrainian capital. “The number and scale of missile strikes on Kyiv sites will increase in response to all terrorist-type attacks and sabotage carried out on Russian territory by the nationalist regime in Kyiv,” the Russian Defense Ministry said. , announcing the destruction of a surface-to-air missile production workshop in the Vizar factory.

Still through its Defense, Russia also claimed to have killed around thirty Polish mercenaries in a strike carried out in northeastern Ukraine, in a context of heightened tensions between Moscow and Warsaw. “As a result of the strike, a detachment of mercenaries from a Polish private military company was liquidated in the village of Iziumske, in the Kharkiv region. Up to 30 Polish mercenaries have been eliminated,” Russian Defense Ministry spokesman Igor Konashenkov said in a statement.

These statements seem to herald a new change in approach by Russia which, after failing to defeat the defenders of kyiv, announced at the end of March that it would concentrate on eastern Ukraine and had withdrawn its forces leading the assault on the Ukrainian capital. On Thursday, the governors of two Russian regions bordering Ukraine accused Ukrainian forces of bombing two villages in Russian territory, Klimovo and Spodariouchino, injuring seven. In Klimovo, the attack was carried out by two Ukrainian helicopters, Russian authorities have claimed, charges denied by kyiv and unverifiable independently.