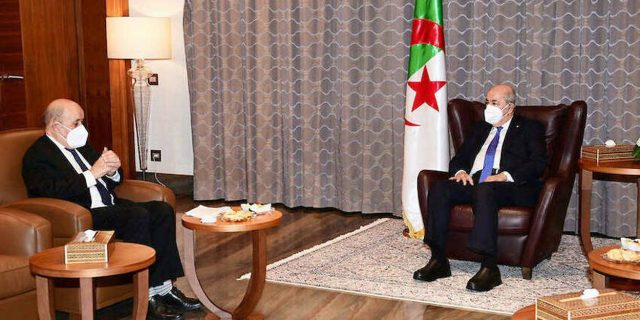 VSThis time, the visit on Wednesday April 13 of the French Minister of Foreign Affairs had not been announced. It comes barely five months after Jean-Yves Le Drian’s last trip to Algiers, in a context of strong diplomatic tensions between the two countries. Algiers had indeed recalled its ambassador to Paris in October in reaction to remarks by French President Emmanuel Macron affirming that Algeria, after its independence in 1962 which put an end to 132 years of French colonization, had been built on “a memorial rent” maintained by “the politico-military system”.

After this episode, all that remained was to consolidate the thaw. Once again, it is the head of French diplomacy who has taken on the task. Jean-Yves Le Drian stressed the “indispensable” nature of cooperation between France and Algeria for the stability of the region. “We also face regional challenges, first and foremost terrorism. Our cooperation in the field of security and for the stabilization of our regional environment is therefore essential, in the Mediterranean as in Africa”, he declared after talks with his Algerian counterpart, Ramtane Lamamra, and the President Abdelmadjid Tebboune. “The evolution of the situation in the Sahel and the need to relaunch the transition process in Libya underline the need for this,” he added.

“We have continued the work undertaken on the ongoing relaunch of our bilateral relations, which are essential for each of our two countries and which we wish to ensure the long term, with the prospect of an upcoming meeting of the CIHN”, the High Intergovernmental Committee Franco-Algerian level, indicated Jean-Yves Le Drian. Scheduled last year, the meeting of this committee was postponed due to political tensions.

The war in Ukraine and gas

The head of French diplomacy also referred to Russia’s invasion of Ukraine, stressing that this conflict had “major consequences in terms of the diversification of energy supplies for Europeans, as well as in terms of the security of food supplies, including for Algeria”. Algeria, a leading gas exporter, supplies about 11% of the gas consumed in Europe, compared to 47% for Russia. Several countries seeking to reduce their dependence on Russian supplies since the invasion of Ukraine have turned to Algeria, also an ally of Moscow, but Algiers has very limited capacity to increase its exports. Algeria on Monday signed an agreement to increase its gas deliveries to Italy via the Transmed gas pipeline passing through Tunisia.

Read:  War in Ukraine: in Aude, Masha Levchenko, "We Ukrainians have freedom in our blood!"

Chance of the calendar, the same day of April 13, the candidate of the National Rally, Marine Le Pen, who will face the outgoing President Emmanuel Macron during the second round of the presidential election, next April 24, spoke of his vision of relations with Algiers if she was elected to the supreme magistracy. “Recognizing the past, its glorious elements and its gray areas, does not mean repentance. I want to establish friendly relations with the Algerian people,” she said on the subject during a press conference in Paris. Before adding: “Basically, we are not economically dependent on Algeria, nor on its gas, and it is above all in Algeria’s interest that relations with France be healthy and peaceful. »