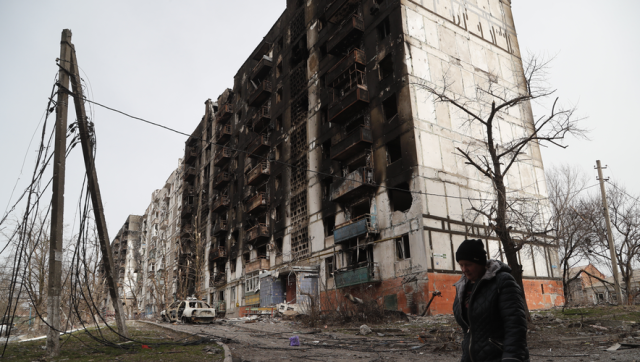 All information related to the Russian invasion of Ukraine on Tuesday April 12, which marks the 48th day of the conflict.

French gendarmes from the Criminal Research Institute of the National Gendarmerie (IRCGN) have arrived in Ukraine to identify the victims of the war and determine the causes of their death. They “will answer the questions of the kyiv prosecutor”, declared on franceinfo Colonel Franck Marescal, director of the IRCGN.

– Zelensky is afraid that Russia uses chemical weapons in Mariupol

Ukrainian President Volodymyr Zelensky said on Monday April 11 that the Russian army could use chemical weapons, particularly in Mariupol.

“One of the occupiers’ spokespersons said they may use chemical weapons against Mariupol’s defenders.”

Read:  Baverez - Faced with Russia, the democracies have woken up

– Mariupol about to fall

The Ukrainian army said Monday, April 11 to prepare for “a final battle” in Mariupol given the number of ammunition and men who remain on site.

It’s a matter of hours assured the soldiers on the spot. The Russians have virtually taken complete control of the port city.

Nearly 5 million Ukrainian children have had to flee their country since the start of the Russian invasion six weeks ago.

UNICEF director of programs Manuel Fontaine spoke of the 4.8 million children who fled out of the 7.5 million Ukrainian children and told the UN Security Council: “They were forced to leave everything behind: their homes, their schools and, often, their family members.”

In addition, according to the organization some 142 children have died since the start of the conflict.

Read:  Coup in Burkina Faso: a thorn for Barkhane