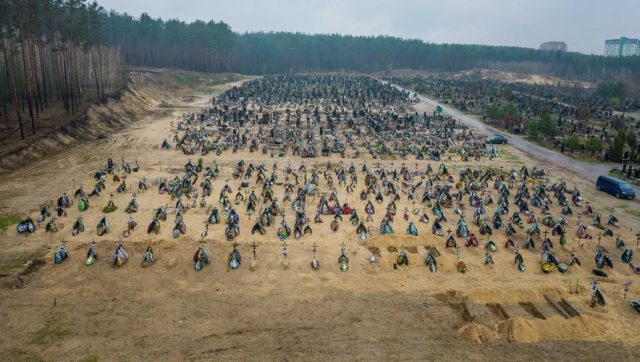 While satellite images reveal the presence of “mass graves” near Mariupol, evidence of potential abuses is accumulating across the country, warns the UN.

Satellite images show “the existence of mass graves in the northwest of Manhouch”, near the besieged city of Mariupol, Le Monde reported on Friday.

These photos, taken by the American company Maxar, seem show long rows of close graves of a cemetery in the village of Manhouch. Maxar, quoted by Associated Press, said the graves were dug in late March and expanded in recent weeks. In a message published on Telegram, Vadym Boïtchenko, the mayor of Mariupol, accuses the Russians of “hiding their military crimes”. In Manhouch, “the occupants would have buried between 3,000 and 9,000 residents”, he says.

Evidence of potential war crimes is accumulating against Russia, announced at the same time the Office of the United Nations High Commissioner for Human Rights (OHCHR).

“During the past eight weeks, international humanitarian law has not only been ignored, but has simply been thrown overboard,” she said.

No confirmation at this stage of a genocide

“What we saw in Kramatorsk, in the government-controlled area, on April 8, when cluster munitions hit the train station, killing 60 civilians and injuring 111 others, is emblematic of the failure to adhere to the principle of distinction (between civilians and soldiers), the prohibition to carry out indiscriminate attacks and the precautionary principle which is enshrined in international humanitarian law”, insisted Michelle Bachelet.

With regard to the Ukrainian army, the UN has information on detainees arbitrarily and the inability to communicate with loved ones, which raises questions about “enforced disappearancesrespect for the law and the risk of torture and ill-treatment”.

Ravina Shamdasani, spokesperson for the High Commissioner for Human Rights, does not rule out violations of humanitarian law on the Ukrainian side, but “the very large majority of these violations, and by far, are attributable to Russian forces” , she points out.

92.3% of the number of victims recorded by the services of Michelle Bachelet “are attributable to Russian forces, as are the allegations of murder and summary executions”.

According to the OHCHR, its observers recorded a total of 5,264 civilian casualties – 2,345 killed and 2,919 injured in Ukraine between February 24, when the war began, and April 20.

Read:  When Elizabeth II had her portrait taken

“We know that the real numbers will be much higher as the horrors inflicted in areas of intense combat, such as Mariupol, are revealed,” warned Michelle Bachelet.

The UN has documented, in particular, during a mission to Butcha on April 9, the murder, including by summary execution, at least 50 civilians. And this is “not an isolated incident”, confirmed Michelle Bachelet.

The United Nations says it received more than 300 reports of killings of civilians in the regions of kyiv, Chernihiv, Kharkiv and Sumy, all under the control of Russian armed forces in late February and early March. UN observers are also looking into accusations of sexual violence committed by Russian forces.

Asked about the allegations of genocide – made in particular by US President Joe Biden – OHCHR spokeswoman Ravina Shamdasani replied that the agency had not found information to support them at this stage.

“A lot of these legal qualifications – crimes against humanity and genocide – have to be determined by a court of law, but no, we haven’t documented any patterns that might be akin to that,” she said, while France still refuses to use this heavy word.