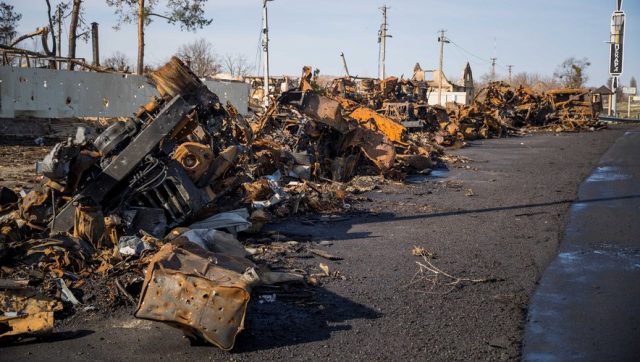 Russian forces struck the capital Kyiv and Lviv in western Ukraine on Saturday, following through on their threat to launch more attacks on Ukrainian towns after the sinking of the Russian flagship in the Black Sea. One person was killed and several others injured in strikes on the Ukrainian capital, Kyiv Mayor Vitali Klitchko said in a televised conference on Saturday.

An explosion was heard in the early hours of the day in the Darnytskyi neighborhood in southeast Kyiv. According to Moscow, the strike hit an armored vehicle repair plant. Kyiv’s mayor said rescuers and medics were working at the site, but gave no further details.

According to the Ukrainian military, Russian warplanes took off from Belarus and also hit the Lviv region near the Polish border, where four cruise missiles were shot down by Ukrainian air defenses. Russia also said it struck a military maintenance facility in the southern city of Mykolaiv.

Russia pledged on Friday to launch new strikes on Kyiv and said it used cruise missiles against the Vizar factory on the edge of Kyiv, which it said manufactured and repaired missiles.

These attacks follow the shipwreck, Thursday, of the Moskva, flagship of the Russian fleet in the Black Sea. The United States has become convinced that the cruiser Moskva sank after being hit by two Ukrainian missiles, a senior US official said on Friday.

A “symbol of power”

The cruiser Moskva was a “symbol of powerhope and rebirth of our fleet” after the fall of the Soviet Union, said Captain Sergei Gorbachev, addressing the crowd gathered in front of a monument erected in honor of the founding of the Russian Navy in 1696 in Sevastopol, this Friday, April 16. The large city of Crimea, annexed by Russia in 2014, was the home port of the missile ship, which had participated in all recent Russian military campaigns, in Georgia in 2008, in Syria and in Ukraine.

“There will be victories, there will be tragedies, but the memory remains,” added Captain Gorbachev to a silent crowd, including former crew members. “The loss of a ship, especially a flagship, is a tragedy for all those tens of thousands of people who have served on board for more than 20 years,” said Georgi Ployakov, an Orthodox priest who was taking part in the ceremony.

The presence of Russian warships in the Black Sea, armed with missiles, raises an increased possibility of strikes against Ukraine’s defense industry and logistical infrastructure, the Ukrainian military said on Saturday. She also added that the Russian Navy was active in the Sea of ​​Azov blockading the port of Mariupol.

Ukrainian President Volodimir Zelensky also announced on CNN on Friday that between 2,500 and 3,000 Ukrainian soldiers had died since the start of the conflict between Russia and Ukraine, adding that 10,000 others had been injured. According to the leader, 19,000 to 20,000 Russian soldiers have been killed since the start of the war. Moscow, for its part, had reported last month the death of 1,351 Russian soldiers and 3,825 wounded.

Yesterday, kyiv announced that it was fighting to try to break the siege of the city of Mariupol where fighting is raging around the port and the Ilyich steel plant.

“The situation at Mariupol is tough and rough. Fighting is taking place right now. The Russian army is constantly calling for additional troops to take the city,” Ukrainian Defense Ministry spokesman Oleksandr Motouzyanik said. “But so far the Russians have failed to capture it. totally,” he said in a televised briefing.

For the first time since the offensive launched on February 24, Russia has used long-range bombers to hit the port city in southeastern Ukraine, Oleksandr Motouzyanik said. Russian forces are also focusing their efforts on capturing the towns of Rubizhne and Popasna in the east of the country, he added.