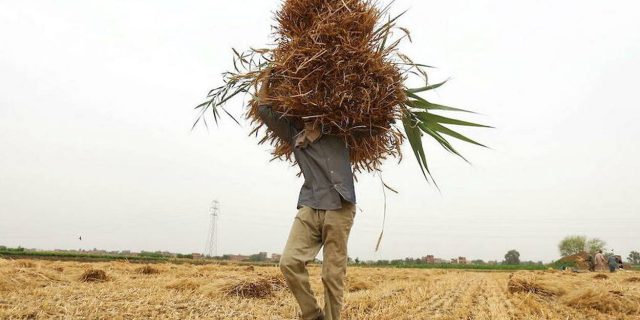 Lhe war in Ukraine prevents the export of cereals stored in the country and endangers future production. A situation that puts Africa under tension. Meeting at a summit on Monday and Tuesday in Brussels, the leaders of the European Union (EU) decided to accelerate their efforts to release the stocks blocked in Ukraine, in particular by negotiating with Moscow a secure access to the port of Odessa, in order to avoid a global food crisis. The EU intends to take into account that severe food shortages could trigger a large wave of migration to Europe from Africa and the Middle East, a risk also highlighted by Ukrainian President Volodymyr Zelensky during his speech on Monday . Faced with the blockade imposed by the Russian army in the Black Sea, paralyzing the strategic port of Odessa, Ukraine is also desperately trying to export some 20 million tonnes of cereals stored in its silos. This should be done by the next harvest, this summer, which will in turn need to be stored.

The story is the same with the President of Senegal, Macky Sall, currently at the head of the African Union. “The situation is worrying,” he warned EU heads of state and government in a videoconference. “This crisis particularly affects our countries because of their strong dependence on Russian and Ukrainian wheat production,” insisted Macky Sall. “The continent could plunge into stagflation, a combination of slow growth and inflation,” warned Akinwumi Adesina, President of the African Development Bank (AfDB), which has just published its new economic forecasts. We learn that African GDP is expected to grow by 4.1% in 2022, but with inflation accelerating to 13.5%, under the pressure of commodity, energy and food prices.

While the UN fears “a hurricane of famines” in African countries which imported more than half of their wheat from Ukraine or Russia, the current president of the African Union urged the 27 to do everything “to release available stocks. According to estimates by the organization chaired by the Portuguese Antonio Guterres, 282 million people, or more than a third of the undernourished individuals in the world, lived in Africa in 2020. “To this are added 46 million Africans threatened with hunger and undernourishment due to the Covid pandemic. The worst may be ahead of us,” he warned, noting that soaring fertilizer prices could cause a “20-50 percent” collapse in cereal yields in Africa this year.

Read:  War in Ukraine: what does the intriguing letter Z, now a symbol of Russian propaganda, mean?

Europeans keep repeating that Western sanctions against Moscow are “not responsible” for the tensions in food markets. For the Belgian Prime Minister, Alexander De Croo, Russia is in the process of “taking world cereals hostage”. Illustration: in addition to the blockade of ports, Moscow “deliberately bombards warehouses and fields”, affirmed the President of the European Commission, Ursula von der Leyen, who accused President Vladimir Putin of using “hunger and cereals to exercise power “. However, “winning the battle for food security is important from a strategic point of view for the Europeans, because otherwise the African countries, already reluctant to support the West against Moscow, will feel betrayed” , warned Italian Prime Minister Mario Draghi.

French President Emmanuel Macron announced on Tuesday that he had proposed to his Russian counterpart Vladimir Putin the vote of a resolution at the UN to lift the blockade of Odessa. Before demining the port to allow bulk carriers to dock there, “we need security guarantees for the Ukrainians, the assurance that the Russians will not take advantage of this to attack”, underlined the French leader. “There is no question that, under the cover of a maritime corridor, there is a weakening of the security situation in Ukraine”, added Charles Michel, President of the Council (body representing the Member States).

President Macron highlighted “the important role” of Turkey, a member of NATO and which holds a strategic position in the Black Sea. “We must prevent a NATO country from finding itself, unwittingly, caught up in an incident leading to a conflict”, worries a European official. According to Mario Draghi, Vladimir Putin has already indicated that he could open access to Odessa “provided that the ships do not carry weapons”, which implies “controls”.

In the immediate future, the leaders of the 27 want to speed up the establishment of “priority routes” to get Ukrainian cereals out by road, rail, or even by barge on the Danube. “It’s complicated for logistical reasons, and more expensive,” noted Charles Michel, however. These routes will allow at best to transport a third of wheat stocks, according to a European source. Ukrainian wagons are not compatible with EU rail networks due to a different wheel gauge, which forces at the border to transship grain into European standard trucks or wagons.

A war with multiple consequences for Africa

Macky Sall was also alarmed at the consequences of European sanctions on the grain trade as the EU will exclude the main Russian bank, Sberbank, from the international financial system Swift, a crucial secure messaging system for transferring funds. “When the Swift system is disrupted, it means that, even if the products (to buy) exist, payment becomes complicated, if not impossible,” he worries. The Senegalese president also warned that soaring prices for fertilizers – mainly produced in Russia, Ukraine and Belarus – could cause a “20-50%” collapse in cereal yields in Africa this year. “The mechanisms are in place so that payments can be made and that there is the possibility of having these fertilizers delivered,” assured Emmanuel Macron. Before the war, Russia and Ukraine together accounted for 30% of world wheat exports.