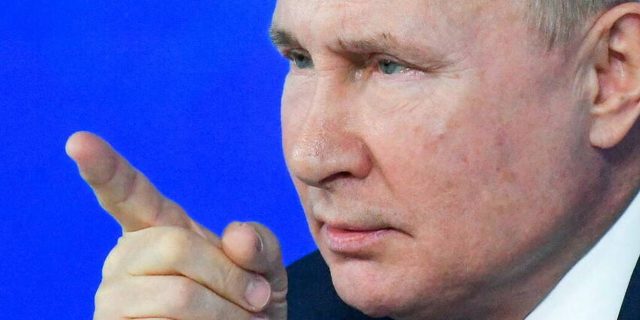 Lhe tension continues to rise between Washington and Moscow at the start of 2022. On Thursday January 13, Vladimir Putin made it known that the adoption of American sanctions against Russia would constitute the overcoming of a “limit” in the tumultuous relations between the two blocs. This statement followed the presentation by the United States of a plan aimed precisely at sanctioning Russian inclinations in Ukraine.

Important detail: the sanctions mentioned by Washington specifically target Vladimir Putin. “Sanctions against a head of state is a measure that would cross a line, it would be equivalent to a severance of relations,” denounced the spokesman for the Russian presidency Dmitry Peskov. He noted that the US Democratic senators’ proposal “does not help establish a constructive atmosphere for the Russian-Western talks” underway this week on de-escalating tensions around Ukraine.

A new draft sanctions against Putin

Senior US Democratic senators on Wednesday unveiled a new sanctions bill that aims to punish Vladimir Putin and provide financial aid to Kiev in the event of a Russian invasion of Ukraine. The law titled “Defending the Sovereignty of Ukraine” provides for sanctions against the Russian President, Prime Minister Mikhail Mishustin, senior military officials and several entities of the Russian banking sector.

The announcement of this “extremely negative” sanctions project, according to the Kremlin, came on the eve of a meeting in Vienna of the Permanent Council of the Organization for Security and Cooperation in Europe (OSCE), the third and final sequence of an intense diplomatic ballet aimed at defusing the risk of a conflict in Ukraine. On Monday, tense discussions brought together in Geneva the American and Russian deputy foreign ministers, Wendy Sherman and Sergei Ryabkov.

Deep “differences” on security in Europe

On Wednesday, NATO and Moscow held talks in Brussels, at the end of which they noted their deep “differences” on security in Europe. “However, we would like to hope that common sense will prevail,” added Dmitry Peskov, stressing that Russia has “never lacked” and “will not lack the political will to pursue a dialogue”.

Accused by Americans and Europeans of preparing an attack against its Ukrainian neighbor, a Western ally, Russia countered by saying that the deployment of tens of thousands of Russian troops on the border was a reaction to the growing and hostile presence of the NATO in what Moscow considers its zone of influence. Russia has assured that it has no “intention” to attack Ukraine, but is calling for the signing of a treaty banning any future enlargement of NATO, a request deemed unacceptable in the West.

Read:  Good deal news Play without limits with this fixed gaming PC equipped with an RTX 3090!