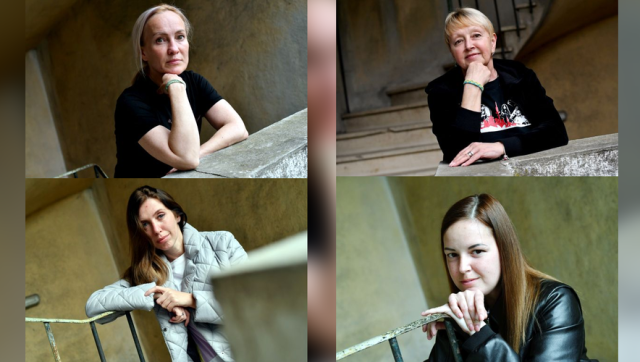 A month after their arrival in La Grand-Combe, these inhabitants of kyiv testify.

Arrived with seven other women and children on March 12, Luda is particularly grateful for the means put in place in the Cévennes to help them: “We weren’t thrown here and left without assistance or contact..” In the three-room apartment made available by the La Grand-Combe town hall, the three families are happy to be able to live together: “It’s a great freedom for us, especially with simple things like food.”

On the terrace overlooking the Cévennes, she points to flower boxes. “We created a small garden and we grow radishes there”, jokes the retired, formerly a music teacher. On a daily basis, the four women do not let themselves be defeated. They have already visited the city, followed the presidential election and are involved in the French lessons given to them, in order to find a job.

“In the street, people greet us”

They, who fled the suburbs of kyiv, where they lived, not far from the infamous town of Boutcha, say they were welcomed with great humanity by the authorities. And it continues today. “The gendarmes came to see us to make sure everything was going well”, says Luda. “The inhabitants come to talk to us, even if we don’t understand French, complete Jenia. So they pet the dogs.”

Read:  War in Ukraine – The breath of a second Arab Spring

Their children were also able to be taken care of effectively. The three boys attend kickboxing lessons several times a week and go to school, where they learn the language of Molière. Jenia’s eldest, Daria, 16, finds herself in a more complicated situation. Obliged to follow the courses of her high school in Ukraine remotely, in order to pass her end-of-year exams (the equivalent of the baccalaureate), she had planned to return to university next September. Even if, today, nothing is sure for this young girl passionate about cinema, arts and music.

However, despite the feeling of security, Lena confides that we “can’t help but think of our families and loved ones who are still there. We still live with this fear.” Their stories are haunted by the specter of war, which they sometimes evoke mechanically: “At night, it was the worst. Do you remember?, throws Jenia, addressing her neighbour. When everything is calm and you know something is going to happen…”

Exiled, far from their homes and their husbands, they follow, via social networks, the daily life of their country and now fear reprisals from the regime of Vladimir Putin against their people who resisted the Russian army. “How, in a modern world, can this still happen?asks Jenia. There are so many other ways to wage war: cyberattacks, economics, hybrid warfare… We just can’t figure it out. Why come and kill us?”

Read:  A 78-year-old French woman murdered with a knife in Morocco

With the help of Dalila, speaker in French as a foreign language (FLE) at the Léo-Larguier and Léo-Pasteur colleges, the two Jenia and Lena try to tame the pet peeve of foreign students: the gender of words, and the masculine and feminine pronouns that accompany them, a very different structure from their mother tongue.

Next step: numbers. After only two lessons, their teacher testifies to their enthusiasm, by the many questions they ask and their desire to learn the language of Molière.

Classes are held in French, with the help of automatic translators on the telephones, in rooms made available by the two schools. In small groups to learn better, Dalila relies on listening and watching videos, a vital aspect of understanding the French language.