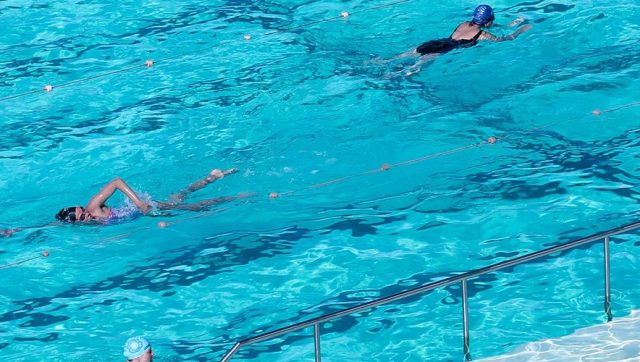 Two rows of apprentice swimmers vigorously stir the water in the pool to create a current that Darling, a Nicaraguan woman who is training to swim across the Rio Grande, set foot on the north shore and enter the United States illegally, must cross. United.

“We are going to leave soon, my daughter and I. That’s why we decided to learn a little ‘to swim, otherwise’ you end up in the water and you are in danger because you don’t know how to swim. ‘get out of it,’ says 38-year-old Darling Molina.

Many illegal migrants have died trying to cross the Rio Grande, a river also called Rio Bravo in Latin America, which serves as the border between Mexico and the United States for more than 2,000 kilometers.

Since the bloody repression in 2018 of the demonstrations against the government of President Daniel Ortega, there are tens of thousands of Nicaraguans who want to emigrate to the United States rather than to neighboring Costa Rica, until now the traditional destination for exiles from the country of Central America.

Fleeing the political, social and economic crisis, 111,872 of them were intercepted at the US border between January 2020 and February 2022, according to the US Customs and Border Protection. In February 2022 alone, 13,295 Nicaraguan migrants were arrested, compared to just 706 a year ago.

“With this course, if a tragic accident happens you will be able to survive”

The swimming course is organized in the town of Esteli, 150 km north of Managua. With thirty years of experience, lifeguard Mario Venerio gives free lessons to those who want to emigrate to the north.

Read:  Is Europe (really) at the mercy of Russian gas?

He mainly teaches survival techniques and first aid gestures. Her classes were advertised on the radio and on social media after at least four women drowned in March trying to cross the Rio Grande.

“With this course, if a tragic accident happens you will be able to survive” and help others, explains the lifeguard to the small group, made up mostly of single women, unemployed or whose work barely provides enough to feed their children.

“The swimming lessons helped me not to be afraid,” admits Martha Martinez, 42, who wants to “try her luck in the United States”. The “coyote” (smuggler) asks her for 5,000 dollars, but some pay up to 14,000 dollars to be able to cross the border by plane, she explains. The trip is financed with the help of relatives already abroad, through loans or the sale of goods.

Nicaraguan migrants leave the country discreetly by bus via Guatemala, where they meet the “coyotes” previously contacted by telephone or on social networks. There, they are hidden in vehicles, destination Mexico then the border with the United States.

On the way, they risk accidents, attacks and kidnappings by criminal gangs. At the end of the road, “we have to face a big obstacle, the Rio Grande. Many have drowned there (…) it scares me”, admits Wilmer Sanchez, 36, who says he does not get out of it in his country.

Read:  Ukraine: kyiv expects new battles in the East and accuses Russia of undermining the North

Bertha Calderon, a 32-year-old engineer and mother of one, knows that “many people have experienced tragedies” on the road, but she still wants to emigrate, because in Nicaragua “everything is expensive and jobs are precarious” .

While the group trains, elsewhere in the city, the Rizo family mourns the body of Neyli, a young woman who drowned on March 5 while trying to cross the Rio Grande. “We had trouble getting the body back,” said Yoconda Rizo, an aunt of the victim. Neyli wanted to join her husband in the United States.

The latter, who could not even come to attend the funeral, ordered a wreath of white flowers placed on the coffin. The family of Gabriela Espinoza, 32, is also in mourning: the latter had left Nicaragua on February 25.

She died drowned in the waters of the border river. She had paid 6,000 dollars to the “coyotes”, including a supplement to be able to cross the Rio Grande by boat. But the smugglers did not keep their word…

A fisherman rescued her, but could not revive her. Her mother Maria Pérez, 71, had however begged her not to leave. Now $5,000 is needed to repatriate the body: all for “a cursed American dream”.