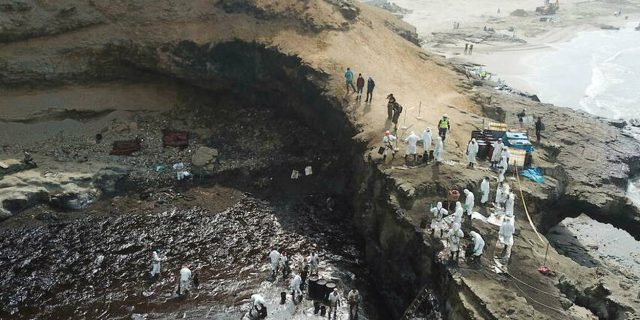 LPeru is very worried. Oil slicks have hit the coasts of the country, following a spill at sea. Faced with the danger posed by this pollution, the Peruvian government announced on Saturday a 90-day “environmental emergency” for the coastal area damaged by the spill of 6 000 barrels of crude oil a week ago. Thanks to this measure, the authorities foresee a “sustainable management of the affected areas”, with “recovery and sanitation works to mitigate the consequences of this disaster.

The Peruvian coasts north of Lima were stained with oil that spilled at sea when crude oil was unloaded from a tanker at the La Pampilla refinery, owned by the Spanish company Repsol, in the region of Lima.

According to the refinery, the accident which took place on January 15, was caused by a violent swell, following the volcanic eruption in Tonga. The tanker, the “Mare Doricum” flying the Italian flag, was loaded with 965,000 barrels of crude oil.

Read:  War in Ukraine: why the Russian army is no longer progressing

The marine ecosystem in danger

For the Peruvian Ministry of the Environment, the declaration of emergency is justified by the fact that the oil spill “constitutes a sudden event with a significant impact on the coastal marine ecosystem of great biological diversity” and represents a “risk high for public health”. This statement indicates that Repsol is responsible for implementing the immediate and short-term action plan.

For its part, Repsol considers that it should not bear the responsibility for this disaster, pointing out that the Peruvian maritime authorities had not issued a warning about the possible consequences of the eruption in Tonga. The company has nevertheless deployed teams and specialized equipment to combat pollution at sea and on land.

According to the Peruvian authorities, the oil spill is moving with the sea current in a northerly direction, which endangers the flora and fauna in two protected natural areas, the National Reserve of the System of Islands and Islets “over approximately 512 hectares”. and the Ancon Protected Area “over 1,758 hectares”. It has already polluted 21 beaches and caused the death of marine species while its potential economic effects are worrying, in particular depriving fishermen of any livelihood and causing the desertion of tourists.

Peru demanded damages from Repsol on Wednesday. He gave her 10 days to comply with all cleaning and decontamination actions.

Read:  Sex would no longer be popular with young people