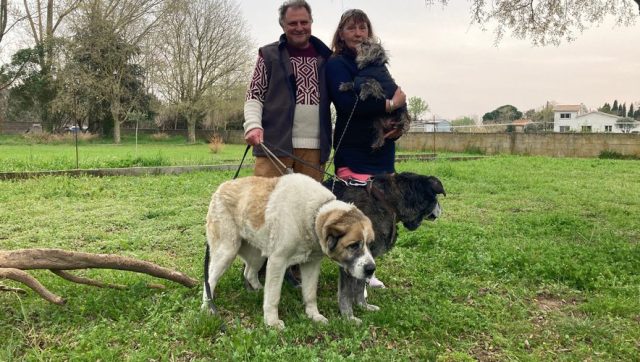 In the convoy returning from the Ukrainian border on Sunday to Montpellier, Snizhanna narrowly escaped the bombardments of her village, north of kyiv. They are now looking for a foster family who could take them in with their three dogs.

In the garden of a property in Castelnau-le-Lez, Snizhanna and Vadim, her husband, can finally rest. In the company of their three dogs, which they were able to save from the Russian bombardments. Quite relative peace because for the couple, health problems accumulate.

adim tested positive for covid upon arrival at the SOS Ukraine reception center at the Olympic swimming pool in Antigone on Sunday evening. Snizhanna was in the hospital on Tuesday to undergo a battery of examinations for her foot, plastered since her passage by emergency services at the Ukrainian border.

It all started at the beginning of the Russian invasion a month ago, with the first bombardments on kyiv. Snizhanna, a philosophy professor, decides to flee the capital and take refuge in her country house north of kyiv. Vadim, chief engineer, was working in Israel at the time. The couple are animal lovers. Two big dogs and a smaller one. Baloo, 10 years old, Bagheera 8 years old, accompanied by Knaffa, a little Yorkshire female of about ten years old.

Read:  War in Ukraine: Russia banned from the world of sport, the state of play live

Cats also live in the country house. “I was alone when the tanks started to bombard the village. A missile fell at the end of the garden, she breathes. I called a neighbor in kyiv, a commander in the Ukrainian army, so that she help me”.

The officer sends a vehicle to pick her up. In his luggage, food for his animals, his papers, the dogs. In panic, Snizhanna twists her foot and wakes up an old fracture. The military vehicle will leave her on the way. She will walk three weeks before reaching the border, without anyone knowing how she survived: “nobody wanted to take me in the car with my dogs”she said sobbing.

In a state of advanced exhaustion, she arrives at the border, wearing a ski suit. The emergency services intervene to rescue her, feed her, rehydrate her. In the meantime, Vadim has arrived in Poland and joins her. But in the transit camps, the same problem: no one wants to take care of them, because of the dogs. No one except a convoy from Montpellier passing by.

Read:  Three weeks before his 113th birthday, the dean of humanity died