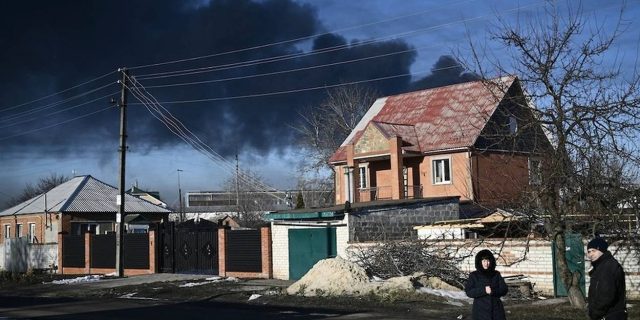 What you must remember :

3:56 p.m. – A solemn message from Emmanuel Macron on Friday before a debate in Parliament

After Emmanuel Macron’s solemn message to Parliament on Friday on the Russian-Ukrainian crisis, a debate with the government is to be held on Tuesday March 1 in the National Assembly and the Senate, we learned Thursday from parliamentary sources. Requested by the opposition, this debate will be held on the basis of article 50-1 of the Constitution, which provides for a declaration by the government followed by an exchange and possibly a vote which does not engage its responsibility.

The European Union is “fully prepared” to welcome Ukrainian refugees fleeing the Russian offensive, who are “welcome”, European Commission President Ursula von der Leyen said on Thursday. “With all member states on the front line, we now have clearly defined contingency plans to immediately receive and accommodate refugees from Ukraine,” said the EU chief executive.

Read:  Fortnite, Chapter 3: heal yourself while on the ground thanks to the distributors, it is possible!

The sanctions that Western countries are preparing to take against Russia “will considerably limit” its access to European and American markets, the German Minister of Economy and Climate warned on Thursday. These measures will “decouple” the Russian economy from many industrial activities, “freeze the country’s financial assets” and finally “considerably limit access to European and American markets”, Robert Habeck declared during a conference of hurry.

3:02 p.m. – Russia claims to have destroyed 74 military facilities in Ukraine

The Russian army said on Thursday that it had destroyed 74 military installations, including 11 airfields, in Ukraine, where Moscow launched a major military operation in the morning. “As a result of the strikes by the Russian Armed Forces, 74 land facilities of the Ukrainian military infrastructure were decommissioned. This includes 11 Air Force airfields,” the spokesman of the Ukrainian military said on television. Russian Defense Ministry, General Igor Konashenkov.

Ukraine is under Putin’s bombs, and Europe, a spectator, is morally trampled on. It is high time to raise our heads.
Read Étienne Gernelle’s editorial – Ukraine: a historic challenge for Europe

2:40 p.m. – The Russian authorities threaten any demonstration on the territory with sanctions

The Russian authorities promised Thursday to suppress any “unauthorized” demonstration organized in the country against the war in Ukraine, where Moscow launched a major military operation in the morning. The Russian Interior Ministry, Prosecutor’s Office and Investigative Committee have all warned Russians against any protest action. The Investigative Committee pointed out that participants in rallies over “the tense foreign policy situation” or clashes faced prosecution.

Poland will shortly open the first nine “reception centers” for Ukrainian refugees, in view of a possible wave fleeing Russian aggression, the Polish Interior Minister announced on Thursday. “There will certainly be a wave of refugees”, he adds, assuring that Poland would accept “as many as there will be at our borders”, but without wanting to estimate their number.

According to our information, an emergency interministerial meeting is to be held at Matignon around the Prime Minister on the issue of energy and cereal price increases, consequences of the conflict in Ukraine.
Read the article : Is Europe (really) at the mercy of Russian gas?

1:57 p.m. – Ukrainian military plane crashes with 14 people on board

A Ukrainian military plane crashed near Kiev on Thursday with 14 people on board, the state emergency service said. The device fell near the village of Trypillia, about fifty kilometers south of the Ukrainian capital, according to the same source.

1:50 p.m. – Arcom will monitor the information broadcast on RT France

Arcom “watches with particular vigilance” the information broadcast on the Russian channel RT in French and does not exclude the use of tools that could lead to the suspension of its broadcast, the media regulator announced on Thursday, after the start of the Russian invasion of Ukraine. “Arcom takes particular care to ensure that the RT France channel complies with its legal and contractual obligations. If it deems it justified, the regulator will not hesitate to make use, without delay, of the legal tools at its disposal. and who can go so far as to request the suspension of its broadcast,” he told Agence France-Presse in an email.

Emmanuel Macron spoke in a speech: “We will respond without weakness, with composure, determination and unity. (…) We will call Russia to account in the UN Security Council.(. ..) I want to tell you my determination to protect you relentlessly. (…) In these troubled hours, when the ghosts of the past are reborn and where manipulations will be numerous, let us not give up our unity. (…) I will get back to you in the hours to come.”

British Prime Minister Boris Johnson also warned that the West would impose “massive” sanctions targeting the Russian economy in response to the invasion of Ukraine. “Diplomatically, politically, economically, and ultimately militarily, this atrocious and barbaric undertaking by Vladimir Putin must end in failure,” the UK Prime Minister said in a televised address to Britons.

While Emmanuel Macron is due to speak in the coming minutes, British Prime Minister Boris Johnson assured Ukraine of his support, calling the Russian president a “dictator”.

The European Council which will meet later today will, in close coordination with the transatlantic partners, take “further restrictive measures” which will have “massive and serious consequences” for Moscow. The European Council deplores “the loss of human life and humanitarian suffering”. EU member states say they are “ready to provide an urgent humanitarian response as a matter of urgency”. The EU will provide additional political, financial and humanitarian assistance. On February 16, the EU granted an emergency loan of 1.2 billion euros to Ukraine. The European Commission had reported total aid of €17 billion in grants and loans since 2014.