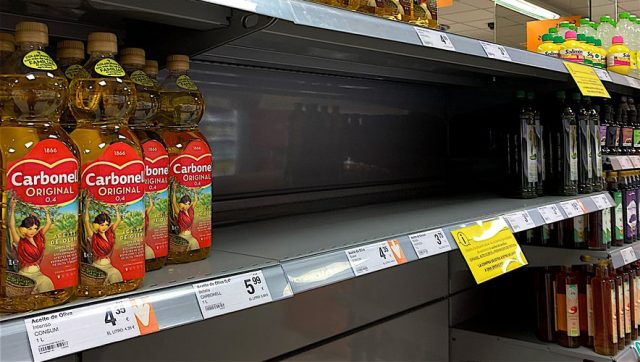 The crisis in Ukraine is making it very difficult to supply sunflower oil, of which the country is one of the main suppliers in Europe. Faced with the situation, manufacturers are forced to adapt. Some must necessarily replace this oil in their recipes.

It enters into the composition of an immense quantity of industrial products. Fat usually cheap, its price has been doubled in a month, reports this Friday, April 15 the New Factory, which is interested in the great adaptability that manufacturers must demonstrate in such a context.

While the law requires manufacturers to detail the composition of their products, many are concerned about the difficulty of sticking to the regulations when the current situation requires last resort adjustments. Jérôme Foucault, president of Adepale (the Association of processed food companies), quoted by Le Figaro, indicates that faced with this problem, manufacturers are in “discussion with the DGCCRF (Editor’s note: which monitors the proper information of consumers ) to obtain exemptions”.

Read:  Ukraine: Vladimir Putin hopes for “a solution” to the crisis

Indeed, some would like to be able to replace the type of oil with the mention “vegetable oil”, even if the change of label in such a short time seems complicated.

Mondelez, an American agri-food multinational present in France, has already “taken the temporary decision to replace sunflower oil, when possible and necessary, with other sustainable vegetable oils”she said in a press release quoted by Usine Nouvelle.

In a press release, the NGO Foodwatch is concerned about the risks of changing the composition of many industrial products. “In place of the sunflower, we will find rapeseed oil or palm oil. And imports of GMO soybean meal from America for animal feed will also soar,” she said.

The consumer defense association UFC que Choisir also took up the issue in early April, also alerting the risk of allergens. Indeed, if sunflower oil is replaced without mention by peanut oil, allergy sufferers could be at risk.

“This substitution, which could be spread over one to two years, poses two problems of lack of information to the consumer: the mention of the allergen risk, and the fairness of the information on the product”, details the association.

To remedy this, the UFC Que Choisir calls for “the updating of recipes on the e-commerce sites of retail chains and those of manufacturers”, and the installation of billboards clearly visible in the departments concerned.