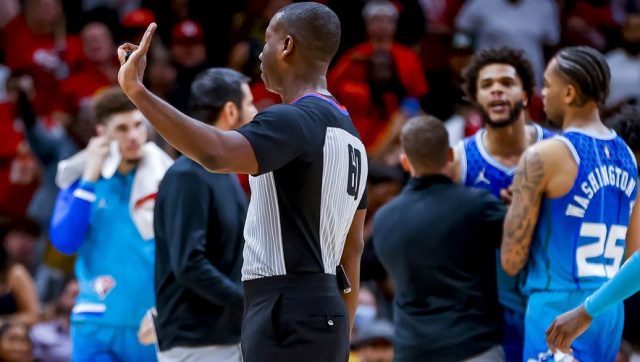 The NBA on Thursday April 14 imposed a fine of 50,000 dollars (46,000 euros) on Charlotte Hornets striker Miles Bridges, who had thrown his mouthguard in the public after being expelled from the match lost on Wednesday April 13 against the Atlanta Hawks.

The NBA playoff qualifier was in Atlanta, and when Bridges left the court, ruled out by referee James Williams, he heard a Hawks fan shout something unpleasant at him.

He then turned and threw his mouth guard into the crowd, the very light object hitting a 16-year-old girl sitting nearby in the stands. “I was pissed off and got carried away. I was aiming for the guy who yelled at me and hit a little girl. It wasn’t the right thing to do and I’m ready to take the consequences,” regretted the Hornets player.

Read:  Ukraine will introduce a state of emergency to prepare the country to face a possible Russian offensive

He said he was ready to apologize to the girl. Another fine was decided Thursday by the NBA, for a Minnesota player, Patrick Beverley. He will have to pay a fine of 30,000 dollars (27,000 euros) for “inappropriate remarks during an interview and on social networks”, after the victory of the Timberwolves on Tuesday against the Los Angeles Clippers.