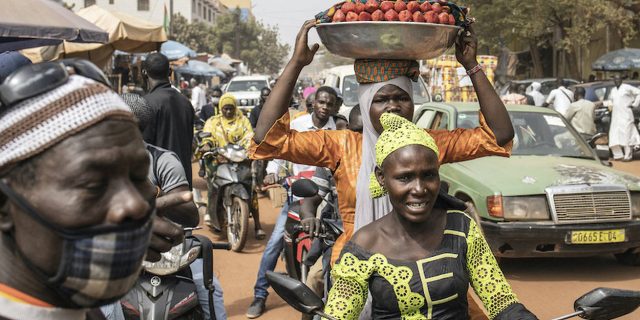 Lhe days and weeks before the coup d’etat which overthrew the former Burkinabè president Roch Marc Christian Kaboré, there were first these demonstrations at the initiative of civil society organizations which had multiplied calls for the resignation of the Head of State. In question, his inability to find the answer to a security crisis that has shaken the country for more than six years. Among these structures of civil society, the Coalition of Patriots of Burkina Faso (Copa-BF), made up of about twenty sub-organizations whose common fight remains the quest for the sovereignty of their country. It is moreover this coalition which was at the origin of the blocking, in mid-November 2021 in Kaya, in the center-north of Burkina, of a French military convoy which had left Côte d’Ivoire to join Mali via Burkinabe territory. At the height of the demonstrations against the power of Kaboré, leaders of the organization had been imprisoned. A week after the putsch, Roland Bayala, spokesman for the Coalition of Patriots of Burkina Faso (Copa-BF), returns, for Le Point Afrique, to these days before the pronunciamiento and lists his expectations vis-à-vis of the new authorities, both on the format of the next inevitable transition and on the profile of the actors who will have to carry it out. For this 40-year-old, everything must be done with a view to respecting the will of the people of Burkina Faso as much as possible, for whom it will be difficult to do without the involvement of civil society.

The Africa Point: President Roch Kaboré was overthrown on January 24 by the Patriotic Movement for Safeguarding and Restoration (MPSR). Burkina was suspended from ECOWAS authorities a few days later. Was it preventable?

Roland Bayala: The situation we know today was avoidable if and only if the former president of Faso had acted as a good head of state and had worked to meet those who, each time, called to take to the streets. We had many solutions to offer him, but he unfortunately chose to listen to his closest advisers rather than the voice of his people.

Your organization is one of those which had demanded the departure of the Head of State long before his fall. Now that his resignation is effective and that soldiers are in charge, what is left for you to do?

Allow me first of all to greet these Burkinabè brothers in the army who, at one point, understood the call of the Copa-BF and other organizations of civil society. It was up to them to take their responsibilities, done. We plan to meet the new authorities because we believe that it is together that we will be able to rebuild Burkina and proceed with its refoundation. We are not going to force the hand of these authorities because we are not here for some cake. Our structure was created to serve Burkinabè people who were in danger. But there is still a lot to do. The MPSR certainly has a schedule to offer us for the coming days. We will therefore wait for the presentation of this agenda to advise.

What do you expect from the soldiers at the head of the country?

We expect a lot from this army which must work to unite the Burkinabè people, put them at the center of governance in order to get the country out of the ordeal it is experiencing today. In essence, we ask them to achieve what they took power for, namely securing the territory, which is an indisputable priority. And to do this, the MPSR will have to work on the diversification of international partners for greater efficiency. In this regard, we are working on the development of a memorandum that we will submit to the current leaders.

At the head of the Patriotic Movement for Safeguarding and Restoration, there is Lieutenant-Colonel Paul-Henri Sandaogo Damiba, who promises to work to restore the physical integrity of the territory. What credit do you give him?

I usually tell those who ask me this question that I owe my current freedom to the army. If it hadn’t been for this interruption of Roch Kaboré’s power, I would, like other comrades, still be in prison. Against people who have responded to the call of the people of Burkina Faso, we cannot immediately draw up sanctions. This is also why we reject this way of proceeding from ECOWAS. In short, we give credit to these soldiers and offer them the opportunity to prove to the people that they deserve their trust.

What can be the ideal path to follow for a return to a normal constitutional life?

A return to a normal constitutional life must be done in agreement with the people. There will possibly be National Meetings for Refoundation, as in Mali, especially since, in the speeches of the MPSR, mention is made of this refoundation, knowing that this cannot be done with a single camp. We hope that thanks to this refoundation, the people of Burkina Faso will be listened to, in all its components, in the depths of all regions. And that the sum of the consultations will be donated to Ouagadougou.

What do you think can be a reasonable duration for a transition before an election is held?

We are not in a speed race. When it comes to the lives of a people, when it comes to getting a nation back on track. Because there are so many things wrong with our country, there is no need to fixate on timelines. It will take the time it will take for Burkina to become again as Thomas Sankara had wished. It will even take twenty years if this is to allow the future generation not to experience the same pangs of terrorism, this weakness of the administration that we knew. We are not in a hurry. Because, when we talk about refoundation, we cannot stop a clock and ask people to follow. Let us remember the transition in 2014: the political class put the pressure for the holding of elections in one year. We rushed to go to the elections and immediately after we fell into the cycle of terrorist attacks. This teaches us that we should no longer subscribe to this logic. Thus, the new authorities have our support in laying the solid foundations for a real and profound overhaul.

What, in your opinion, is the typical profile of the actors who should lead this transition?

You just have to put the right men in the right place. Future consultations will no doubt lead to the choice of profiles to form the management team for the transition. Provided that those who are going to make these choices have a deep enough look and do not go to work quickly.

As an organization that took part in the demonstrations against ex-president Kaboré, do you imagine a transition team without civil society?

While Lieutenant-Colonel Paul-Henri Damiba multiplies the meetings of explanation with the components of the nation, we are witnessing all-out media outlets from other leaders of civil society as well as from the political class. What do you think ?

You can’t stop comments. Everyone goes there according to their side or their vision for Burkina, especially since freedom of expression is recognized for all. But when you are in charge, you have to go beyond these comments and retain those that are constructive. On the other hand, we have observed that many civil society organizations have been created since the overthrow of Kaboré’s power. We follow and we are amazed. We are all the more amazed that people are drawing a transition where they would sit even though the current authorities have not yet decided on their roadmap. We leave these people in their rantings and we wait to see what will happen in the days to come. We are not going to run in all directions, we are going to listen and the people, and the authorities, before advising.

The first sanctions against Burkina fell very recently. The Heads of State of the sub-regional organization will meet again on February 3 in Accra. What do you expect?

ECOWAS and UEMOA have not taken the real measure of what happened in Mali. We believe that it is partly the sanctions taken against Mali that led to the fall of Roch Kaboré. If the Heads of State have not yet understood the stakes of these sanctions, they have an opportunity to show that they have now understood. It is these sanctions that could remove other heads of state from power in their respective countries. Today, the leaders of the sub-region have an interest in acting in line with the expectations of their peoples rather than listening to foreign voices, in this case those of Western countries, including France and the United States. , who put sand in our attiéké. We have the impression that today our presidents do not understand what is happening in their countries. Let them take their sanctions. But the fact remains that the peoples of Mali, Burkina Faso or Niger are sovereign. In turn, we will also take action against ECOWAS.

So you think that civil society is also in a position to sanction ECOWAS?

Absolutely. In response to the suspension of Burkina from the bodies of the organization, we applauded because we do not want an institution that works in this way. The first real sanction that we will inflict on the institution is to drive out all the leaders of the countries that make it up. We will release them without exception and we have the capacity to do so. We also aim to take ownership of ECOWAS, to work to ensure that it is the pan-Africanist civil society that sits there.

For the moment, there is no question of economic sanctions as in neighboring Mali. At the cost of a return to security, one of the avowed reasons for the seizure of power by the junta, are you ready to support a roadmap that would not suit ECOWAS?

If the roadmap takes into account the aspirations of the people, we will support it. The rest doesn’t matter.