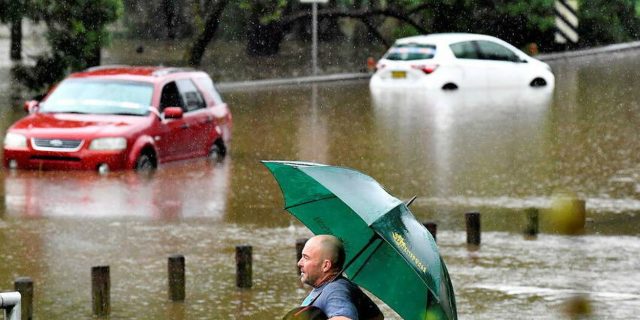 Ihe Australian resort town of Byron Bay, known for its idyllic beaches, suffered heavy flooding on Wednesday as severe storms battered the country’s east coast. Torrential rains have continued since Monday, with more than 250mm falling in the region in 24 hours. Many businesses in central Byron Bay were forced to close after rising waters brought traffic to a standstill. The normally busy main street was virtually deserted on Wednesday and turned into a muddy river. Nearby, the town of Alstonville saw 420 mm of rain fall in 24 hours. On Wednesday morning, thousands of people had to leave their homes to take refuge in higher places.

For weeks, eastern Australia has been experiencing extreme weather conditions, fueled by the La Niña phenomenon and climate change. In early February, at least 22 people died in flooding caused by record rainfall.

In Lismore, where water had risen to 14.3m last month, the town’s seawall gave way again on Wednesday morning, emergency services confirmed. Local MP Justine Elliot warned residents on social media that the seawall’s siren would not go off due to a malfunction. “You must leave now!” she urged on Twitter. When the Lismore seawall gave way in February, floodwaters poured into the center of the town, reaching the second floors of many homes and businesses, forcing hundreds of residents to take shelter on their roofs.

Water levels could reach 11.4m this week in the city, hampering clean-up operations, according to forecasts. “Unfortunately, overnight our worst fears came true,” Emergency Services Minister Stephanie Cooke said on Wednesday. The heavy rains that fell on already saturated land caused “flash flooding in a number of places”, she added, and several landslides also occurred in the area. During a visit to Lismore following the February floods, Australian Prime Minister Scott Morrison said the country was “becoming difficult to live with because of these disasters”.