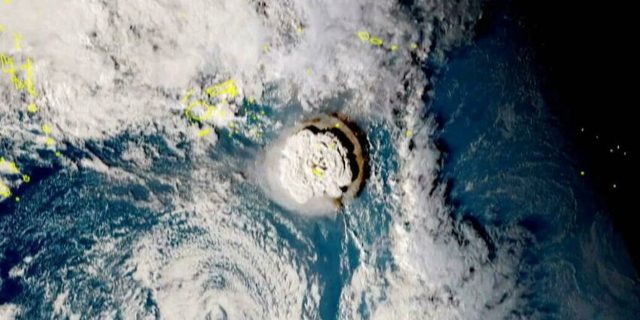 Un tsunami reached the Japanese coast late this Saturday, January 15, after the eruption of an underwater volcano located in the Tonga archipelago. Waves over four feet high hit Japan via the southern island of Amami Oshima around 11:55 p.m. local time (1455 GMT), before other areas along Japan’s Pacific coast saw smaller waves. . Chile and the west coast of the United States have also been placed on alert.

Striking views from space showed the timing of Friday’s Hunga Tonga-Hunga Ha’apai eruption on one of Tonga’s uninhabited islands: a huge mushroom of smoke and ash, and a wave that immediately unleashed. The eruption lasted eight minutes, and was so loud it was heard “like a distant thunderous sound” over the Fiji Islands, more than 800 km away, according to Fiji officials in Suva City.

In Suva City, footage shared on social media showed huge waves pounding the shore. “It was a massive explosion,” Tongan resident Mere Taufa, who was at home at the time, told the Stuff news site. “The ground shook, the whole house shook. It came in waves. My younger brother thought bombs were exploding near our house,” she said. A few minutes later, the water invaded their house, and she saw the wall of a neighboring house crumble.

“We immediately knew it was a tsunami, with this water gushing into the house. You could hear screams all around, and everyone started fleeing to higher ground,” she added. King Tupou VI of Tonga was evacuated from the royal palace of Nuku’alofa and taken to a villa far from the coast. Victorina Kioa, of the Tonga Public Utilities Commission, called on people to “get away from all places that are at risk, ie beaches, reefs and all flat coasts”. The authorities have also advised the entire population to stay indoors as much as possible, to wear masks if they have to go out and, there too, to protect all water supplies.

Tsunami warnings have been issued for Fiji and Samoa, New Zealand, Vanuatu, Chile and Australia where authorities have warned the wave could hit the coastline, including in Sydney. In Chile, the National Office for Emergency Situations warns of the possibility of a “minor tsunami” reaching Easter Island – where a slight rise in sea level of around 30 centimeters has been felt-, and part of the mainland coast of the country.

Read:  The perilous "neutrality" of Serbia between Russia and Europe

In Ecuador, authorities have recommended the suspension until 5 p.m. local (22:00 GMT) of seaside activities and until 3:00 p.m. (21:00 GMT) on the Galapagos Islands “due to the impact on the tide and strong currents.

In the United States, tsunami warnings have been issued for the west coast of the country, Hawaii having already been affected by “minor flooding”. “Leave the beaches, ports and marinas” in the areas concerned, recommended the National Weather Service, specifying with “relief” that the American islands of Hawaii did not report damage.

The states of California, Oregon and Washington could be affected, as well as Alaska and the Canadian province of British Columbia, the NWS said. “The main expected impacts are strong rip currents and flooding of coasts and low-lying areas,” the weather service warned.