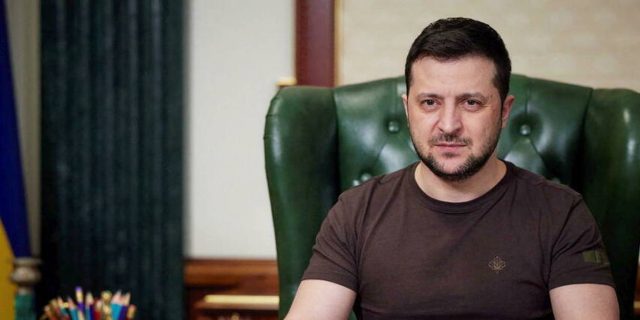 Lukrainian President Volodymyr Zelensky on Saturday (April 16th) called on the world to “prepare” for Russia’s possible use of its nuclear weapons, during an interview with several Ukrainian media. “We should not wait for Russia to decide to use its nuclear weapons. We have to prepare for this,” he said in the interview broadcast by six Ukrainian news sites, as well as the Ukrainian presidency on Telegram.

We need “drugs” [contre les radiations], air-raid shelters,” he said. “We have to talk to them, sign treaties, crack down economically. [Les Russes] can use any weapon, I’m sure. On Friday, Volodymyr Zelensky had already judged that “the whole world” should be “worried” about the risk that Russian President Vladimir Putin, cornered by his military setbacks in Ukraine, will resort to a tactical nuclear weapon.

Read:  DIRECT. War in Ukraine: "Faced with all scenarios, we have enough to protect the French", reassures Attal

“Not just me, I think the whole world, all countries should be worried,” he said on the American channel CNN. He echoed the statements to this effect of the head of American foreign intelligence William Burns who had estimated the day before that such a threat should not be “taken lightly”. “We haven’t really seen any concrete signs such as deployments or military measures that could aggravate our concerns”, however qualified the head of the CIA.

After the start of the Russian invasion of Ukraine on February 24, the Kremlin briefly mentioned putting its nuclear forces on alert. Moscow will only use nuclear weapons in Ukraine in the event of an “existential threat” against Russia, Kremlin spokesman Dmitry Peskov then declared on CNN, without further details. According to the highly respected Bulletin of the Atomic ScientistsRussia is equipped with “1,588 deployed Russian nuclear warheads”, including 812 on land-based missiles, 576 on submarines and 200 on bombers.

Read:  Pokémon: you dreamed of it, the real PokéBalls are here!