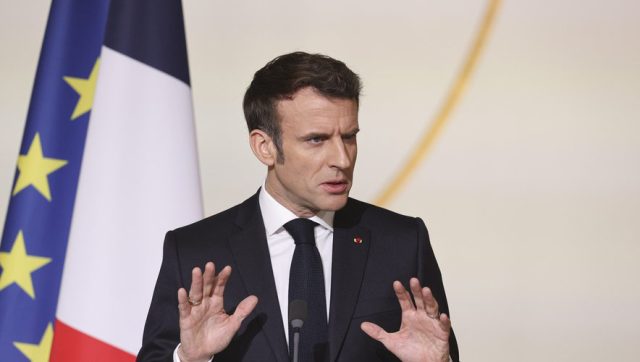 While Russia launched the offensive against Ukraine this Thursday, February 24, Emmanuel Macron convened an emergency defense council at 9 a.m. He takes the floor at the beginning of the afternoon, to take stock of the situation.

The situation changed overnight on Thursday, February 24. Ukraine woke up to war, as Russian President Vladimir Putin launched offensives in the country. Internationally, responses are being organised. NATO meets this Friday morning, while the leaders of the member countries of the European Union have an appointment this Thursday evening.

Read also :
DIRECT. War in Ukraine: the military airport of Hostomel, near Kiev, target of a Russian attack

Emmanuel Macron, he announced the urgent holding of a defense council at 9 a.m., which lasted an hour. He is addressing the French this Thursday at the start of the afternoon.

“Russia has launched a massive attack”, noted Emmanuel Macron in the opening of his address to the French concerning the maneuvers of Vladimir Putin. “In this ordeal, France stands alongside Ukraine. I want to salute the courage and determination of the Ukrainian president,” said the French president, placing the country very clearly on Ukraine’s side.

“By choosing war, President Putin has decided to flout the sovereignty of Ukraine and to cause the most serious attack on peace and stability in Europe for decades.“, declared Emmanuel Macron. “We are ready”.

“We will respond without weakness”

The French president explained his willingness to respond to Russia’s actions. “To this act of war, we will respond without weakness, with coolness, determination and unity. We will take decisions at the G7 this afternoon, at the European Council this evening in Brussels, and at the NATO summit. which will be held in the next few hours. We will hold Russia accountable to the United Nations Security Council”, he recalled, about the deadlines that now await the country, concerning the decisions to be taken in the face of to Russia.

“A turning point in the history of Europe and our country”

“In these troubled hours when the ghosts of our past are reborn, and where there will be many manipulations, let’s not give up anything of our unity”, called the French president to conclude this four-minute speech, during which he stood at the times in front of the French flag, the European flag and the Ukrainian flag.