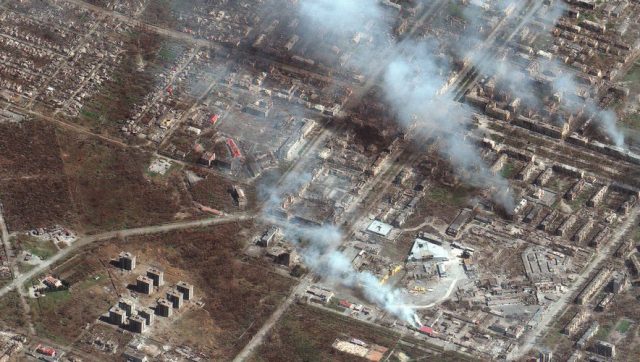 Russia wants the total surrender of Mariupol, a strategic city for Vladimir Putin, while the last Ukrainian fighters on the spot have not responded to the Russian ultimatum. If the city falls Volodimir Zelensky cannot guarantee the proper continuation of “peace efforts”.

Russia issued an ultimatum to the last entrenched Ukrainian fighters on Sunday in the rubble of the port of Mariupol for them to lay down their arms, ensuring that they have quasi-control of the premises, which would constitute his biggest catch of war in nearly two months of conflict.

Several hours after the end of the ultimatum, at 03:00 GMT (06:00 a.m. Moscow time), there was no sign that the Ukrainian soldiers entrenched in the Azovstal steel plant had acceded to Moscow’s injunction. .

The Russian Defense Ministry has asked the last Ukrainian soldiers in Mariupol to lay down their arms as of 06:00 a.m. (03:00 GMT) Moscow time on Sunday if they want to live.

The pope evokes a “bloodbath”

According to the terms of the agreement proposed by Russia, the fighters present in the steel plant had to leave it by 10:00 a.m. Moscow time, without arms or ammunition. Ukrainian President Volodimir Zelensky on Saturday accused Russia of “deliberately trying to destroy everyonein Mariupol, adding that the deaths of his soldiers risked ending peace efforts.

Read:  War in Ukraine: According to Putin, the West will not succeed in isolating Russia from the rest of the world

In his Easter blessing “Urbi et Orbi”, Pope Francis lamented an “Easter of war”, pleaded for an end to the bloodshed and implicitly criticized Russia. “Peace come to war-torn Ukraine, so hard-hit by the violence and destruction of the cruel and senseless war into which it has been dragged,” he said.

Russia announced earlier that there were no more Ukrainian soldiers in the entire perimeter of Mariupol, information that could not be independently verified.

Moscow said the remaining soldiers – which it says include Ukrainian and foreign fighters – are stuck in the Azovstal steelworks. “In view of the catastrophic situation at the Azovstal steel plant, as well as for purely humanitarian reasons, the Russian Armed Forces call on the fighters of the nationalist battalions and foreign mercenaries to end hostilities and lay down their arms,” ​​the Russian Defense Ministry wrote in a statement.

“All those who lay down their arms are guaranteed that their lives will be spared.” kyiv did not immediately react to Moscow’s proposal.

The fall of Mariupol, besieged since the first days of the war launched on February 24, would allow Russia to consolidate a land route linking the Crimean peninsula which it annexed in 2014 and the regions in the hands of pro-Russian separatists in Donbass, eastern Ukraine.

Read:  Gran Turismo 7: The PlayStation exclusive shows its gameplay on a legendary track!

Ukrainian President Volodimir Zelensky announced on CNN on Friday that between 2,500 and 3,000 Ukrainian soldiers had died since the start of the conflict between Russia and Ukraine, adding that 10,000 more had been injured. According to the leader, 19,000 to 20,000 Russian soldiers have been killed since the start of the war. Moscow, for its part, had reported last month the death of 1,351 Russian soldiers and 3,825 wounded.

But “the city still hasn’t fallen,” Ukrainian Prime Minister Denys Shmyhal told US television channel ABC, adding that Ukrainian fighters still there were continuing to fight and still controlled parts of the city.

A bombing also left two dead in the eastern town of Zolote, the local governor said.

A missile strike in the early hours of Sunday also damaged infrastructure in the town of Brovary, near the Ukrainian capital Kyiv, the mayor of Brovary said in an online message. According to Russian Defense Ministry spokesman Igor Konashenkov, an ammunition factory was destroyed.