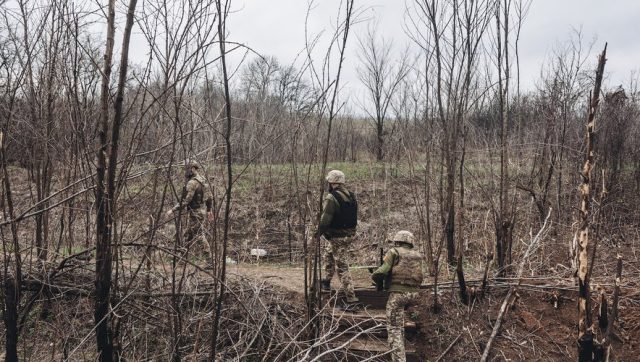 The Ukrainian army is preparing for a new Russian assault towards the Donbass region. A territory apart in Ukraine, at the heart of an identity and political conflict since 2014. Explanations.

Russian forces launched a new offensive on most of Ukraine’s eastern flank on Monday (April 18th) and the “battle of Donbass has now begun”, Ukrainian President Volodimir Zelensky and senior officials in the country said.

The Ukrainian army has been preparing for a new Russian assault on its eastern flank since Moscow withdrew its forces from around Kyiv and northern Ukraine late last month to focus on an assault towards the Donbass region of Ukraine.

“Now we can say that the Russian forces have started the Battle of Donbass, which they have been preparing for for a long time,” Volodimir Zelensky said in a video address.

What is the situation on the ground?

“This morning, on almost the entire front line of the (eastern) regions of Donetsk, Luhansk and Kharkiv, the occupiers tried to break through our defenses,” the secretary of the Security Council of the Ukraine, Oleksi Danilov.

Russia has bolstered its forces in eastern Ukraine by transferring troops there it has withdrawn from northern Ukraine and Belarus, a close Russian ally. In a message posted on Facebook, the Ukrainian Armed Forces Command said that the main Russian military force was focused on taking control of the entire Donetsk and Luhansk regions, which constitute the strip of land known as from Donbass.

Read:  Assault on the Capitol: American democracy still to the test

What is the Russian strategy?

From the start of the conflict, the Donbass had served as a pretext for Vladilmir Putin to launch a “special operation”. Supposed to secure these border territories, the Russian intervention had finally deviated towards a real invasion of Ukraine.

After a failure in the west, obviously caused by the unexpected resistance of the Ukrainians and the massive delivery of weapons by Western countries, Vladimir Putin is looking for a clear victory. A symbolic victory that he is about to obtain in Mariupol, a city in the south of Donbass bordering the Russian territory of Crimea.

The Kremlin now wants to concentrate its forces on Donetsk Oblast and Luhansk Oblast. According to several experts, Vladimir Putin could choose to encircle these territories and trap the Ukrainian fighters entrenched there to defend the Donbass.

Read:  Sète: €50,000 in donations in support of Ukraine voted by the agglopôle

Why is the Donbass a separate territory?

Since the collapse of the Soviet bloc, the Donbass occupies a special place in Ukraine. This strip bordered by the Sea of ​​Azov was hit by a serious economic crisis in the 1990s, after the country’s independence, giving rise to desires for independence and strong pro-Russian sentiment. Even today, Russian is the first language of around 70% of the population.

In March 2014, following the fall of Ukrainian President Viktor Yanukovych and the annexation of Crimea by Russia, war broke out in the Donbass between pro-Russian rebels and the new central authority in kyiv. In two referendums – deemed illegal by kyiv and Western countries – the population of Donbass voted in favor of independence.