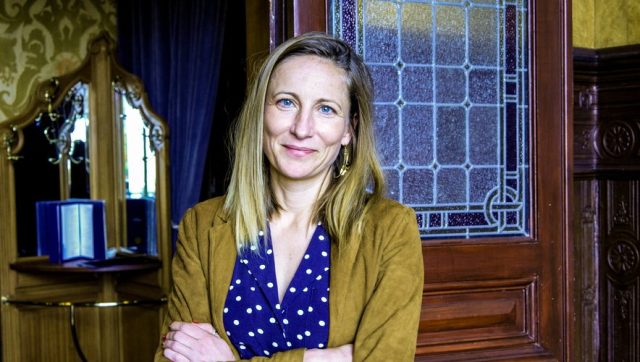 The photoreporter, originally from Carcassonne and awarded in 2018 at the Visa pour l’Image festival in Perpignan, was one of the very few Western journalists who remained there after the final departure of the Americans from the capital of Afghanistan.

“The atmosphere there is very weird. People were expecting bloodthirsty monsters who were going to cut off heads and stone people. And we have pretty polite, educated young men saying they’ve changed and obviously want to please. to the West. But two hundred meters further, we come across other Taliban coming from the countryside and who are hyper aggressive. “

She could not imagine being anywhere other than Kabul this summer, as the US military left the country after twenty years there. Since 2003, Véronique de Viguerie, a photo reporter who works a lot for Paris Match, has multiplied the reports in this country where she lived for several years at the start of her career.

Last February, the 40-year-old, originally from Carcassonne and mother of two children, returned there to “a hyperpositive report, on an Afghan women’s ski team who would represent the country in international competitions.” Many believe that the developments driven by Westerners in Afghan society, such as the emancipation of women, have become a given.

One of the Taliban commanders tells us: “Kabul will fall”, which we find very surprising.

“I am going back there for a documentary on Canal + and in mid-July I meet the Taliban who are at the gates of Kabul. They have a lot of weapons, they are very sure of themselves, and one of the commanders tells us: “Kabul is going to fall”, which we find very astonishing. “

By car through the tribal areas of Pakistan

She returned to France at the end of July. Decides in August to go there again: “It was very difficult, I had to go through Pakistan and then drive through the tribal areas. There really weren’t many journalists there. “

She returned on August 24 to a transformed Kabul, where the Americans were holed up at the airport. “The Taliban are everywhere in the streets, they are the ones who ensure the security of the hotels, who control the cars. This gives a hypersecure climate, whereas before there was no longer any security in Kabul, everyone was afraid of everyone.. You can walk the streets at midnight, which was impossible for a long time. “

“Some people love to be photographed”

Paradoxically, she can photograph freely. “It has always been an advantage to be a Western woman in Afghanistan, you are a bit like a third sex, neither a man nor a woman like the ones they know. Some speak a little English, they love to be taken in. photo and ask for it to be sent to them via WhatsApp. “

On the evening of August 30, the Americans left Afghanistan for good. “The Taliban fired in the air all night to celebrate.” The next day, she goes to the airport. “It had been completely surrounded by impassable brick walls, and there was access again. Me, I’m in the lot and on the spot it’s euphoria, they roll like crazy pick-ups on the tracks with great blows of kalach ‘”.

Read:  Porsche, Audi, Bentley... hundreds of luxury cars lost off the Azores after a ship fire

A demonstration of women repressed before his eyes

Another strong memory: this demonstration of twenty courageous women that Véronique de Viguerie photographs. “There are about thirty Taliban who surround us, they gas us and start to type. We see in the eyes of some that for them, it is too much, they have hatred. There we were very afraid, some were so enraged. “

Véronique de Viguerie returned to Afghanistan in December. “The situation has changed, the people are paying a heavy price for the sanctions.” She covers a terrible reality: these miserable families, who sell their daughters.

Girls sold at nine to men

“Girls sold at nine, pregnant at ten, and who at 15 have already had four childrens, and have already decided to sell the elder. They have the same life as before, and in twenty years nothing will probably have changed. What we reproach the Taliban, their mysogyny, their obscurantism, it is in fact a good part of Afghanistan which is like that. “

A country in which the American parenthesis seems never to have existed: “Everything was erased with such rapidity. For a whole part of the population, it never touched them. And for the others, all these women in Kabul who had studied, worked, it was a door to the future that was suddenly closed. They were offered dreams, but not the means to fulfill them “.