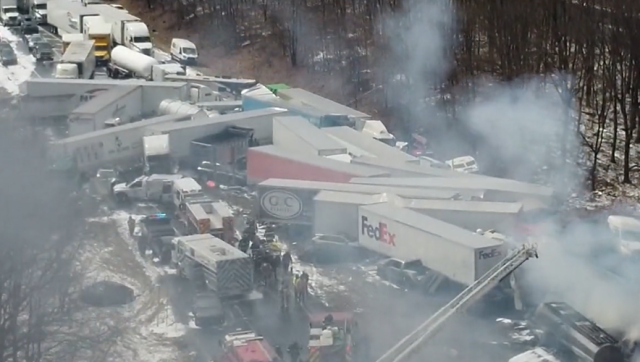 With a balance sheet of three dead and twenty injured, the pileup which took place in Pennsylvania on Monday March 28, involving around fifty vehicles, is one of the most impressive in recent years. The appalling weather at the beginning of the week would be the main cause.

It’s a bewildering scene that took place Monday on Interstate 81, near Pottsville, Pennsylvania. In an apocalyptic atmosphere due to difficult weather marked by heavy snowfall and thick fog, dozens of vehicles, cars and trucks alike, crashed into each other, while some drivers had pulled over on the lower side.

Widely broadcast on social networks before being taken up by various media, the images are impressive. We see drivers losing control and crashing into vehicles already stationary on the lane. In the end, on a video published by Fox News, we can see that about fifty vehicles found themselves in the middle of this giant accident.

Read:  News good deal Sales at Acer, everything must go! Up to $300 reduction on a selection for Valentine's Day!

A heavy human and material toll

USA Today reports that “some people were trapped in their cars”, while “three tractor-trailers were on fire and at least two other small fires were reported”. The toll is at least three dead and twenty injured, all of whom were taken to hospital. The material damage is difficult to quantify but could amount to several hundred thousand euros.

For the moment, it is impossible to know which vehicle caused the accident. It is also impossible to determine with certainty what the causes are, but according to the first police reports, it would seem that the execrable weather conditions are not unrelated to its occurrence.