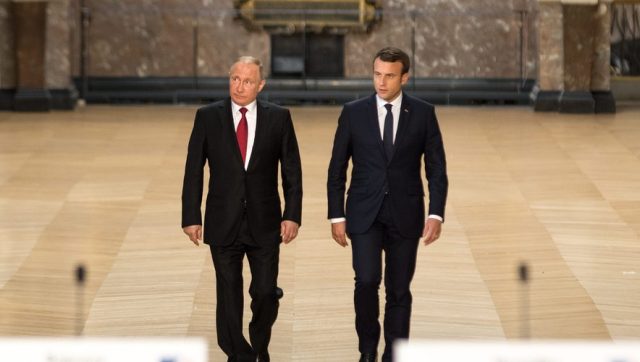 Candidates for the April presidential election in France have mocked Emmanuel Macron’s diplomatic efforts in the Ukraine crisis, accusing the head of state, about to formalize his candidacy for a second term, of having staged his actions for electoral purposes.

Opposition leaders, however, have also been held to account for past comments and their dealings with Russia. While France chairs the Council of the European Union, Emmanuel Macron has been on the front line in trying to prevent a war in Ukraine, even going to Moscow in early February to meet Vladimir Putin there.

In recent weeks, he has also spoken for hours and on several occasions by telephone with the Russian president as well as with other leaders in the hope of achieving a de-escalation. These efforts did not prevent Vladimir Putin from recognizing the independence of two regions of eastern Ukraine held by pro-Russian separatists.

A staging that goes wrong

Reacting to the publication on Instagram of black and white photos taken by the official photographer of the Elysée showing the Head of State, his face closed, seated at his desk near a telephone, Marine Le Pen accused Emmanuel Macron to do too much.

“I saw photos of Emmanuel Macron unshaven, his head in his hands, it’s all very artistic, but it’s not serious to communicate on these subjects,” said RTL. the president of the National Rally (RN). Asked about the criticism of the president, a government source replied: “If they consider diplomacy to be just public relations, then they are downplaying thousands of years of diplomacy.”

Beaten by Emmanuel Macron in the second round of the 2017 presidential election, Marine Le Pen is given second place in the polls, far behind the head of state – whose candidacy is not yet official.

The latest opinion poll carried out by Ifop gives Emmanuel Macron the lead, with 25% of voting intentions for the first round of the presidential election on April 10. Next are Marine Le Pen and Eric Zemmour, another far-right candidate, neck and neck at 16%.

Eric Zemmour, renowned for his nationalist rhetoric, said Russia’s decision to recognize the independence of two breakaway regions in eastern Ukraine showed Emmanuel Macron was disrespected by Vladimir Putin. However, it is difficult to measure the weight of the criticisms against Emmanuel Macron on the Ukrainian file in the electoral campaign, while his main opponents are themselves walking on eggshells on this subject.

For the moment, Macron reigns as president, while the other candidates seem to be wading through the children’s pool.

Marine Le Pen and Eric Zemmour, Russophiles, thus had to resolve to address measured criticisms against the master of the Kremlin. “At the moment, Macron reigns as president, while the other candidates seem to be wading through the children’s pool,” Eurointelligence analysts wrote in a note. “The candidates more favorable to Russia, Marine Le Pen and Eric Zemmour, must now justify their own positions.”

Marine Le Pen, who in 2014 accepted a loan from a Russian bank to finance her 2017 campaign during which she visited Vladimir Putin, was forced to condemn the Russian president’s latest decision. “The act of escalation is really regrettable but it is not final,” she said on RTL on Tuesday.

A tweet published in September 2020 by Eric Zemmour, in which the former columnist said he was in favor of a “Russian alliance” and described Moscow as the “most reliable” ally – ahead of Washington, Berlin or London – was mocked on the social networks. Eric Zemmour wrote in a statement on Monday that Russia’s decision to recognize the independence of the Luhansk and Donetsk regions “violates Ukraine’s sovereignty”.

Russia is primarily responsible for the situation, he added, but it is also “the result of the policy pursued by the West and NATO”. The Republican candidate, Valérie Pécresse, spoke on Wednesday with the Ukrainian ambassador in Paris.