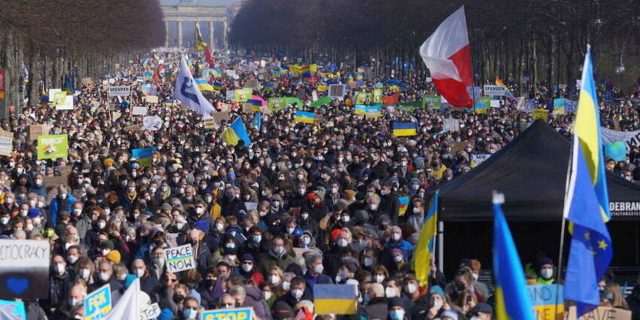 “Sstart the war! Stop Putin! From Berlin to Prague, via Madrid and Vilnius, hundreds of thousands of people in the yellow and blue colors of Ukraine marched in Europe on Sunday to denounce the Russian invasion and express their fear of an extension of the conflict. In the German capital alone, at least 100,000 people, according to the police, gathered in the center, 70,000 in Prague, 40,000 in Madrid, 15,000 in Amsterdam or 10,000 in Copenhagen. In France, in Lyon, Toulouse or Paris, rallies in the colors of the flag of Ukraine again marked their support for this country attacked by Russia on Sunday.

In Berlin, the mobilization was five times higher than what the organizers expected, testifying to the emotion aroused by the war in Ukraine, which awakens dark memories in this metropolis which was the epicenter of the Cold War until in 1990. “Berlin 670 km from the front line”, “Stop the killer” or even “Pas de 3and World War” could be read on the signs held up by the protesters, often draped in yellow and blue. “Slava Ukraini” (Glory to Ukraine), also launched demonstrators in front of the Russian Embassy waving the country’s flags.

In Prague, the famous Wenceslas Square, in the heart of the Czech capital, was packed with people. A symbolic place because it is there in particular that the confrontation with the Russian tanks took place in 1968 during the “Prague Spring”. Nearly 10,000 people also took part in a demonstration in support of Ukraine on Sunday in front of the Russian embassy in Copenhagen. “It is all of you and all of Europe who are threatened by Russia”, launched the head of government Mette Frederiksen, who was present.

In Vilnius, Lithuania, hundreds of demonstrators marched shouting “Glory to Ukraine”. In the streets of Athens, at least a thousand people gathered and demonstrations also took place in Rome, Paris, Amsterdam, Barcelona, ​​Bilbao, Podgorica and Tel Aviv, but also in Ecuador. Even in Iraq, a few dozen Ukrainian expatriates gathered outside a UN building in Erbil, Kurdistan. “Stop the war,” says a sign held up by two young women. Another reads: “We are proud of the Ukrainian army”.