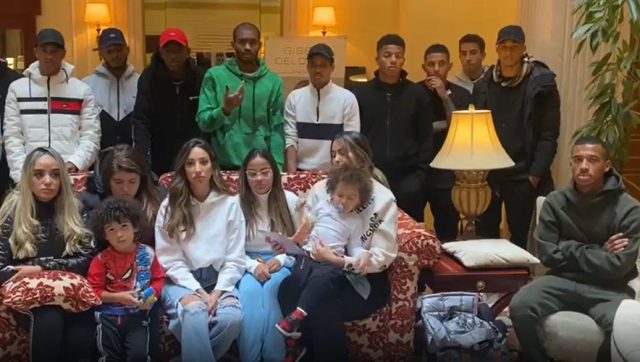 Brazilian footballers playing in Ukrainian clubs asked for help from their government this Thursday, February 24 to be evacuated after the Russian invasion, in a video where they appear confined to a hotel in Kiev with their families.

“There is no fuel in the city, the borders are closed, the airspace too, we cannot leave”, explains in this video posted on Instagram defender Marlon, 26, one of the 12 Brazilian players of the workforce of Shakhtar Donetsk, a club that regularly participates in the Champions League.

“We are staying in a hotel because of this whole situation. We are asking the government of Brazil to support us, to help us,” he added. In the images, we can see in particular international striker David Neres, who recently arrived at Shakhtar from Ajax Amsterdam, and players from Dynamo Kiev, standing in the living room of a hotel.

The Brazilian Embassy in Ukraine said in a statement that it “remains open” to ensure the “protection of (its) some 500 nationals”, asking them to “get into daily contact” with its services.

Russia launched an invasion of Ukraine on Thursday, with airstrikes and the entry of ground forces, including in the direction of the capital Kiev, killing dozens of people in the early hours, according to the Ukrainian authorities.

Initially based in Donetsk, in the Donbass region, the epicenter of the conflict, Shakhtar, 13 times national champions in the past 20 years, moved to Kiev in 2014, at the start of clashes between Ukrainian forces and pro-Russian separatists.

That same year, its ultramodern stadium, the Donbass Arena, which had hosted Euro-2012 matches, was bombed.