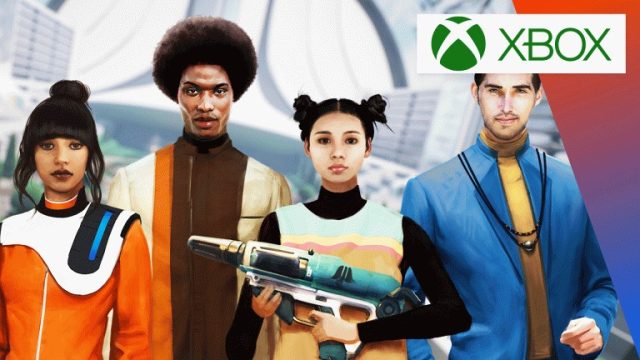 Game News The Anacrusis: A new competitor to Back 4 Blood and Left 4 Dead in the Xbox Game Pass?

Available in early access since January 13 on Steam and Xbox consoles, The Anacrusis is a title in the line of Left 4 Dead, and for good reason, the two titles share the same screenwriter: Chet Faliszek. But while the Xbox Game Pass already includes another representative of the genre with Back 4 Blood, does The Anacrusis have what it takes to establish itself as the new benchmark for cooperative FPS? Not sure.

Presented at the last E3 during the Summer Game Fest, The Anacrusis is a title that had enough to attract the attention of the public first by its rather original atmosphere. If in the same style we were entitled to Deathloop last year, Stray Bombay’s game offers a retrofuturistic visual identity inspired by the 70s. Indeed, the universe of the title is located in the distant future, when Humanity has explored the galaxy thanks to powerful corporations. But while no intelligent life was discovered, humans became complacent. This is when the events of the game begin, since we embody four survivors in a massive spaceship at the edge of the known universe who will have to face hordes of aliens who attack the device. after taking possession of most of the crew.

A simple Left 4 Dead in a retrofuturistic atmosphere?

In this context, the game therefore takes the form of episodes which are currently three in number that we run through in cooperation with four players. Each episode is then divided into four sequences whose goal is always the same: to go from one shelter to another. Along the way, we obviously have to face hordes of aliens against whom we will have to defend ourselves with the help of futuristic laser weapons. Among these enemies are special monsters that all have their own abilities. In shambles, we can cite the Brutes who are particular resistances and who rush at you, the Flashers who dazzle you with the light they give off from their bodies, the Spawners who make tentacles appear which spit acid etc.. .

As you will have understood, this is a well-oiled formula since Left 4 Dead and which we have seen more recently with Back 4 Blood from the same developers (Turtle Rock Studios). To stand out from the competition, the Stray Bombay studio explains that the strength of its title is to offer always different and therefore unique parts thanks to artificial intelligence. The latter is in charge of randomly placing enemies and weapons within the level, but also of adapting the difficulty depending on which group is playing. In fact, it is clear that this argument proves to be unconvincing.

So even though item locations and alien wave spawns change every time, this is a fairly artificial feature since we are still content to always go through the same levels with a fairly simple level design. So, facing a horde with more or less special monsters at one time or another does not fundamentally change the gaming experience, which remains fairly standard. Especially since most of the segments all contain a scripted passage. For example, opening such a door will cause an alarm which will cause a wave of aliens to appear, the only random dimension being the number of special monsters present.

A glaring lack of sensations

The other major flaw of the title lies in its weapons. If Left 4 Dead managed to be still fun to play after several hours of play despite its repetitive formula, it was in particular thanks to its weapons which remained pleasant to handle even after having killed hundreds, even thousands of zombies. Sadly, this is not the case with the laser pistols of The Anacrusis which are sorely lacking in sensations, which means that you get tired of emptying several whole magazines in the face of waves of aliens. This is all the more the case since the duration of each episode is particularly long, between 45 minutes and an hour to see the end of it, which means that we get tired all the more quickly. In shambles, we could say that this is due in particular to the fact that the weapons move little when we shoot, that the sound design does not put them forward or even to the fact that the special monsters do not react much when we shoot them, which which gives the feeling that they lack potatoes.

Despite their retrofuturistic designs, it must be recognized that the arsenal proposed so far is not particularly inspired either, even too classic, with only three main weapons. In addition to a pistol with infinite ammunition, we are entitled to an assault rifle, a submachine gun and a shotgun. From time to time, you can also come across special weapons with very limited ammunition but with formidable damage such as a laser or electric rifle, or even grenades with somewhat original effects. The visual identity of the title is also little used in the levels because between two really inspired places, we are often entitled to just colored corridors to remind us that we are dealing with a title inspired by the 70s.

Read:  Stranger Things Season 4: does the series become more horrifying over the seasons?

To bring some originality to the formula invented by Left 4 Dead, The Anacrusis still tries to bring some original features into its gameplay. Thereby, each character has three charges of a pulse wave that helps repel aliens in case of assault on your character. In addition, we also have a feeling of progression by advancing in an episode thanks to terminals which provide passive bonuses such as making an enemy explode when inflicted a critical hit, increasing the chargers of his weapon, recovering more life thanks to to healing items etc… On the multiplayer side, the title includes a ping system like in Apex Legends which allows you to communicate with your allies without having to use a microphone. Unfortunately, friendly fire is also activated which means that it is not uncommon to injure your companions during a muscular confrontation against a wave of aliens.

At present, The Anacrusis does not have strong enough arguments to make a place for itself within the genre of cooperative FPS. Between Back 4 Blood already present in the Xbox Game Pass, GTFO and its hardcore approach and the recent release of Tom Clancy’s Rainbow Six: Extraction, it is difficult for the Stray Bombay title to stand out with its too simple and classic proposal. For the moment, the title can only rely on its retrofuturistic atmosphere of the 70s which remains under-exploited, its PEGI 7 which intends it for a wider audience than its rivals or its desire to welcome mods. In the meantime, remember that the game is currently only in early access and that new major features may be planned in the months to come. Case to follow.