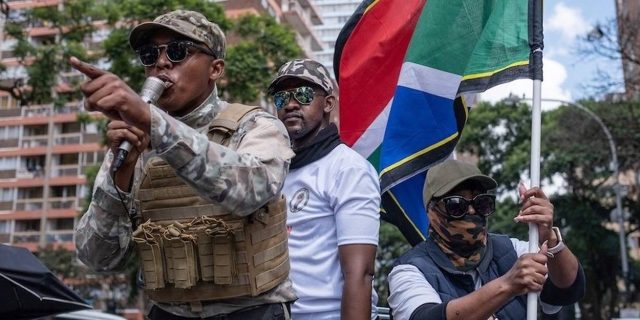 Drelentless and decisive statistics for the social and political climate. The unemployment rate in South Africa increased further in the last quarter of 2021 to reach a new record at 35.3%, the Government Statistics Agency announced on Tuesday (March 29th). This is the absolute record for fourteen years. “This is the highest unemployment rate on record,” StatsSA said in a statement. The official rate had reached 34.9% in the previous quarter. The continent’s leading industrial power now has 7.9 million unemployed out of a population of nearly 60 million. Young people are particularly affected, more than 66% of 15-24 year olds being affected.

Add to that the devastating impact of the health crisis linked to the Covid-19 pandemic on the economy and jobs. President Cyril Ramaphosa announced last week a further easing of restrictions, in particular lifting the obligation of the PCR test for vaccinated people, in the hope of reviving tourism. Will this be enough to bring the pressure down in the country?

In this situation, foreign nationals have become the scapegoats. The government has been on all fronts in recent months, in addition to having to manage the demonstrations of anger against foreign workers, it must also face its political opposition. South Africa is occasionally plagued by xenophobic outbreaks. Sixty-two people were killed in riots in 2008. Violent clashes erupted in 2015, 2016 and again in 2019.

But since January, a movement called “Operation Dudula”, which means “repressing” in Zulu, has been gaining momentum and spreading throughout the country. Far from being episodic, the proximity of “Operation Duduala”, which claims to be pacifist, with political movements is unclear. The demonstrations indiscriminately bring together members of an organization active during the xenophobic riots called South Africa First, and veterans of the armed wing of the ANC called Umkhonto we Sizwe (MK, “Spearhead of the Nation” ), which recently distanced itself from the historic party in power since its dismantling. The leader, Nhlanhla Lux Dlamini, an activist in his thirties from Soweto, invariably dressed in military fatigues and a bulletproof vest during his public appearances, explained that he wanted to “defend the future of South Africans “. Including going to stores to demand that foreign employees be fired. “It’s the law: all work that does not require special skills belongs to South Africans in South Africa,” he reminds anyone who will listen.

Even Julius Malema, the leader of Economic Freedom Fighters, who presents himself as a Pan-Africanist, joined the anti-immigrant rhetoric, saying employers should refrain from prioritizing immigrants over South African citizens. He did not hesitate last month to visit restaurants in Gauteng province to check the employment ratio between South African citizens and foreign nationals. Finally, Julius Malema came to the conclusion that the problem is employers who prioritize foreign workers because they can exploit them. “Don’t hate foreigners, hate the owner of the restaurant, because these foreigners didn’t get hired,” he later told OpenDemocracy.

South Africa has 3.95 million foreigners, according to official statistics, out of a population of almost 60 million. The continent’s leading industrial power struggles with more than 35% unemployment but attracts many African migrants. “Even if they expelled all the immigrants, that would not change the level of crime or that of unemployment,” commented to AFP Jay Naidoo, first secretary general of the main trade union center (Cosatu).

Faced with the scale of the movement, the government has announced plans for a law establishing quotas for foreign employees in South African companies in certain sectors.

Not enough for the first opposition party, the Democratic Alliance, which would like to see the whole government leave. He filed, almost two years ago, before the pandemic actually hit, a motion of no confidence, the first for Ramaphosa. The vote takes place this Wednesday afternoon in the South African Parliament. The result should not prevent the head of state from seeking re-election at the head of his party at the ANC congress, which is to be held next December.