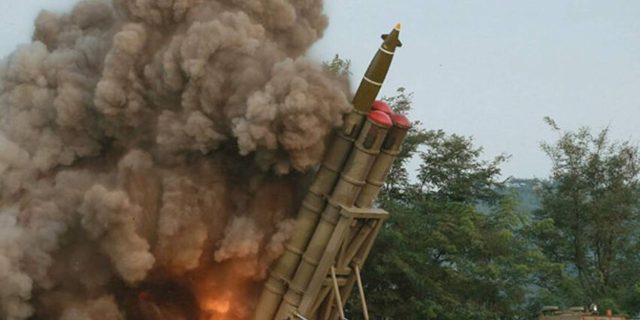 LThe United States will propose to its 14 partners of the UN Security Council to endorse at the international level the American sanctions decided on the day against North Korea after several recent fire of North Korean ballistic missiles, announced Wednesday evening the American ambassador to the UN. After the announcement of new financial sanctions against five North Korean nationals by the US Treasury and State Department, “the United States proposes UN sanctions following six ballistic missile launches from Korea. North since September 2021, each of them violating UN Security Council resolutions, ”Linda Thomas-Greenfield wrote in a tweet.

His message does not specify what type of sanctions could be proposed to the Security Council, where China and Russia, endowed with a right of veto and who have been asking for more than a year for an easing of measures taken against Pyongyang, could s ‘oppose it. According to an American diplomatic source, however, it would not be a question of proposing a new resolution to the UN. Washington has proposed adding to the list of people and entities targeted by the UN Sanctions Committee in charge of North Korea the five North Korean nationals identified earlier by the Treasury, said the source. These people are Choe Myong-hyon, based in Russia, and Sim Kwangsok, Kim Song-un, Kang Chol-hak, and Pyon Kwang-chol, who live in China.

Discussions are underway, according to the same source, to also add to the blacklist of the UN Sanctions Committee two individuals and one entity identified by the State Department: the North Korean O Yong-ho, the Russian Roman Anatolievich Alar and the Russian entity Parsek, accused of contributing materially to the proliferation of weapons of mass destruction by North Korea. Like all UN sanctions committees, the one in charge of North Korea is made up of representatives of the 15 member countries of the Security Council and its decisions must be taken unanimously.

North Korea fired a firing claimed to be from a hypersonic missile last week. While a Security Council meeting took place on Monday on this shot, Pyongyang claimed to have repeated the experience of a hypersonic missile test under the personal supervision of North Korean number one Kim Jong-un. This new test has been described by diplomats as a “provocation”. The last demonstrations of unity of the Security Council date back to 2017. Under the administration of Republican Donald Trump, the United States had unanimously passed the Security Council three resolutions imposing three rounds of heavy economic sanctions on Pyongyang after missile and nuclear tests carried out by North Korea. These measures, still in force, notably limit Pyongyang’s oil imports and prohibit its exports of coal, iron, fishing or textiles.

Read:  Microsoft Flight Simulator: how to sublimate the French decorations? Our selection of extensions