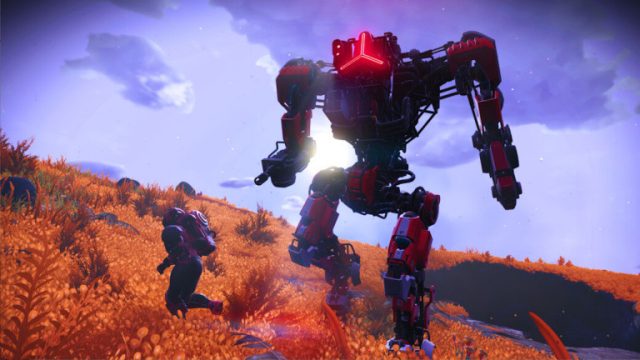 Game News No Man’s Sky: after the release of Sentinel, Sean Murray sheds light on the rest of the journey

Like the framework in which No Man’s Sky makes us evolve, Hello Games’ program to feed its title has no limits. Just yesterday, the studio founded by Sean Murray proudly announced the deployment of the Sentinel update. After so much additional content, one would have thought that No Man’s Sky was going to run out of fuel, but it is not: the journey continues!

Casually, it had been a few months since Hello Games had given any news of its flagship title, which still earned it a nice volley of green wood from players in the past. But, since its inception, No Man’s Sky has largely gone up the slope, thanks to its huge batch of updates – there are still 19 – that Frontiers, last September, and Sentinel, more recently, came to feed.

It is a fact : No Man’s Sky has not finished taking us to explore the universe and its upcoming arrival on Switch, in the summer of 2022 if all goes well, makes it clear to us. In addition to information about what’s new in the Sentinel update, one of the directors of the game, Sean Murray, spoke about the next ambitions of the title and the new ideas that are swarming within the studio.

To infinity and beyond !

In August 2022, No Man’s Sky will celebrate its sixth anniversary: ​​an important date for the title which had two difficult launch years before going up the slope in 2018. Galvanized by what they have managed to undertake with the game, the developers of Hello Games have not said their last word according to the words of Sean Murray. According to him, the game is far from having delivered all of its proposals to us, as he reports to our colleagues at IGN.

Despite the number of updates made since the game launched and the number of tasks we’ve completed, the list of things we’re excited about never seems to get smaller. The team is constantly coming up with new ideas they want to undertake with the game: new content, new features, and areas for improvement. The level of energy and motivation has never been so high and I am clearly amazed. We tend not to speak publicly about what’s on this list, but we can sum up that we’re far from done.

Listening to his remarks, we guess that No Man’s Sky is not about to receive its last update and that there could be a good package if the inventiveness of the teams does not run out of steam. But then, how far will it stop No Man’s Sky ? According to Sean Murray, we will have to scroll through the pages of the calendar to answer this question because the coming months could be busy: first important step, the launch of the game on Switch. In short, to continue his metaphor, the “masterpiece” of Hello Games is not quite finished yet.

I like to believe that No Man’s Sky is such a huge game that we have to paint in big brushstrokes, and then each update comes in to fill in some finer details, but also give new brushstrokes. That’s definitely what’s been going on with the game. If you check out our patch notes for the Sentinel update, you’ll see an absolute ton of fixes, improvements, but also plenty of new features.

Beyond this constant work on No Man’s Skythe teams are working on another major project, as imposing as this one and which Sean Murray describes as “enormous and ambitious”, without being a sequel. Aware of the studio’s past mistakes, Sean Murray wants to keep this project still secret: announcements and revelations will arrive in due course.. In the meantime, space travel is picking up again in No Man’s Sky !