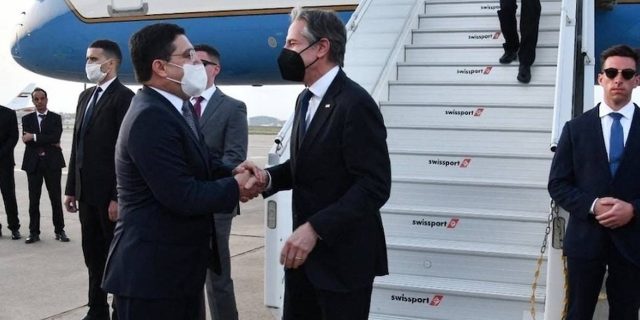 ATfter meeting Arab allies in Israel, US Secretary of State Antony Blinken is visiting Morocco on Tuesday 29 March to consolidate a regional strategic partnership in a climate of tension in the Maghreb and the Gulf. In Rabat, he will meet again with his Moroccan counterpart Nasser Bourita, present Monday at the unprecedented meeting in the Israeli Negev desert with three other Arab ministers, as well as with Prime Minister Aziz Akhannouch. Also on the program, a meeting with the crown prince of Abu Dhabi and de facto leader of the United Arab Emirates, Mohammed ben Zayed al-Nahyan, whose relations with his traditional American ally are crossed by certain tensions.

The issue of Western Sahara, a priority

In Rabat, the issue of the disputed territory of Western Sahara, a priority for Moroccan diplomacy, should be high on the agenda. “Once again, the national cause, after the recognition by the United States of the Moroccanness of the Sahara [NDLR : en décembre 2020]will dominate this visit,” said Moroccan historian Moussaoui Ajlaoui in an interview with the Le360 news site.

The day before this important visit, the United States reiterated its constant position on the question of the Sahara, noting that the autonomy initiative proposed by Morocco is “serious, credible and realistic”, and perceived as an approach to meet the aspirations of the people of the region, said a press release from the US State Department. In this press release, Washington assured the personal envoy of the UN Secretary General, Staffan de Mistura, of its support for relaunching the “political process” under the aegis of the United Nations.

Read:  Pakistan: an attack kills more than 60 in a mosque in Peshawar

The State Department also touted a “strategic partnership rooted in common interests for peace, security, and prosperity” in the region. The visit of the American Secretary of State coincides, in fact, with the last year of the five-year contract of 460 million dollars injected by the American program Millenium Challenge Corporation, which aims to develop education and employment opportunities for young people. .

War in Ukraine and Iran on the menu of discussions

During his travels, Antony Blinken’s talks will also focus on bilateral and regional security, the fight against terrorism in the Sahel, human rights but also the economic impact of the conflict in Ukraine, such as the risk of shortage of wheat, according to American officials. But above all, concerning the war in Ukraine, this visit comes when Morocco did not participate in the two votes of the UN General Assembly condemning the Russian invasion, thus refraining from taking a position in the conflict. This claimed neutrality illustrates Rabat’s desire not to alienate Russia, a member of the UN Security Council, on the question of Western Sahara, according to analysts.

Like Israel, the Emirates and Morocco are united against Iran while the United States seeks to revive the 2015 nuclear agreement with Tehran, supposed to prevent it from acquiring the atomic bomb in exchange for the lifting of international sanctions. Antony Blinken will have the opportunity to discuss regional security with Prince Mohammed ben Zayed al-Nahyan, known as “MBZ”, the strongman of the United Arab Emirates, who has a residence in Morocco. In addition, the Emirates are part of a military coalition led by Saudi Arabia which has been helping the government of Yemen since 2015, at war against the Houthis, close to Iran.

The Secretary of State will end his regional tour on Wednesday with a stop in Algeria, Morocco’s rival in North Africa and Russia’s ally. Discussions should continue on security cooperation – particularly in the Sahel – and the Ukrainian crisis. The American diplomat could thus evoke the reopening of the Maghreb-Europe gas pipeline, which would make it possible to reduce the dependence of the countries of the European Union on Russian gas. This pipeline serving Spain and passing through Morocco was closed in October by Algeria following the severance of diplomatic relations with Rabat in August 2021. Algiers then pleaded “hostile acts” from its neighbor to justify his decision. In addition to Western Sahara, the accelerated normalization between Morocco and Israel is among the disputes between the two enemy brothers of the Maghreb.