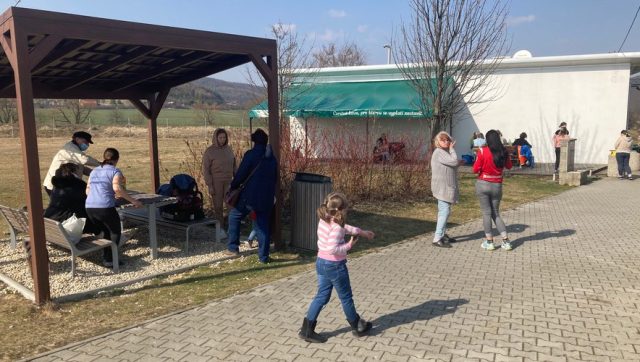 A humanitarian mission that left Castelnau-le-Lez on March 18 returned to Montpellier on Sunday evening, after touring the transit camps for Ukrainian refugees in Poland. The story of three days of extreme tension, with 15 refugees and a baby welcomed in the minibuses.

At exactly 8.16 p.m., the humanitarian convoy of three minibuses that left Castelnau-le-Lez, a utility vehicle and a vehicle with two Ukrainian women and children from Mariupol rolled down in front of the Olympic swimming pool in Antigone, at the SOS Ukraine reception. The faces are tired. The accompanying persons and the refugees crossed a large part of Europe. Poland, Czechia, Austria, Italy and finally France, 2,500 kilometres. Back on a journey that began 48 hours earlier, at the Ukrainian border.

dogs for the trip

On Friday afternoon, the two transit points for Ukrainian refugees in Przemyśl and Medyka, on the Polish border, are in turmoil. During the night, hundreds of Ukrainians were brought in by bus. An epidemic of gastroenteritis has broken out in Przemyśl. The Polish authorities impose the closure of the center for disinfection. The police prevent all access.

Castelnauvienne Elodie Rubio, initiator of the Montpellier convoy, scoured the transit camps. Several families, candidates for exile in Montpellier, are identified: “We have a couple from kyiv with three dogs, no one wants to take them”, she says. He will leave with the Montpellier convoy. Linda and Daniel, a couple from Bordeaux, will take care of the doggies in their van.“We are equipped with cages for transport.”

In the doldrums, the candidates for exile must be found. The drivers are badged as well as the refugees. “There were concerns at the start of the exodus, several young women disappeared”, comments a French volunteer. The small world is gathered in Medyka. Others are recovered in extremis at Przemyśl. The faces are closed, the Ukrainians are wary, nervous. The language barrier doesn’t help.

Met on the road in Poland

In Chelm, the last town before the Ukrainian border, a warehouse serves as storage for donations arriving from all over the world. There, two Americans help with the final packaging before the departure by truck to Ukraine. Joe and Kurt help with logistics: “We come from Dallas, Texas, we are part of a Baptist church. We come to help where there are disaster victims”. They associated with the same church in Poland: “We arrived a week ago. We will stay until the time when there is no longer any need for us”.

Further south, in the parking lot of the Przemyst transit center, Eva, a French volunteer, is looking for a solution for two Brazilians, José and Francisco, former soldiers in the foreign legion. They left for Ukraine to fight: “We live in Paris. We come back because we don’t speak English. The recruitment center didn’t want to recruit us. We stayed two or three days”.

According to them, they have no more money: “The train is too expensive”. They seek to return to France, in a convoy. Montpellier would be a good fit. But places are already taken for Ukrainian refugees.

At 5 p.m., the convoy leaves with an additional minibus which will stop in Nice. Direction Krakow, in the center of Poland for a break in a low cost hotel. Waking up is less difficult. The faces are more relaxed, the refugees display a first smile. Already the Czech border and then the Austrian border. Every two hours the convoy stops. The drivers, in pairs, replace each other. At sunset, it is the arrival in Vienna in Austria and its outlying traffic jams.

Read:  Elden Ring does recycling, the proof in video!

150 Ukrainians at the border in Ventimiglia

One night later, dawn breaks on the highway near Venice, in thick fog. Break on a rest area. The dogs came out to feed them and stretch their legs. The lines are drawn, the drivers are exhausted. Coffee, cigarettes, energy drinks keep you going. Finally, it is the French border, in Ventimiglia. The police stop the convoy at the toll. Ukrainian passport control: “Yesterday we counted 150”comments an official.

In Nice, the first minibus arrives at its final destination. Time for a photo and the convoy leaves. In Marseille, the Ukrainians’ car disappeared, lost in traffic. One of the children in a minibus keeps in touch by telephone. Last detour through the Camargue under the amazed eyes of the refugees to see the bulls and the pink flamingos on the ponds.

Sunday at 8:16 p.m., the vehicle doors finally open in front of the Antigone swimming pool gymnasium. The dogs snort. Volunteers SOS Ukraine, the Red Cross take over to welcome them. The mission is accomplished.

Who are repatriated Ukrainians?

During the return trip, it was difficult to communicate with the Ukrainians. Firstly because of the language barrier. Only one refugee spoke English. In vehicles, summary dialogues through a translation application. Later, Vadim and his wife explained who they were.

There were also two young women with four children including a motor handicapped teenager. Venus of Mariupol: “I had just bought this car, I had hardly ever driven it”, will say one. There was also this woman, a child and a baby, accompanied by her teenage brother. A mother and her daughter, two older single people, a woman and a man.